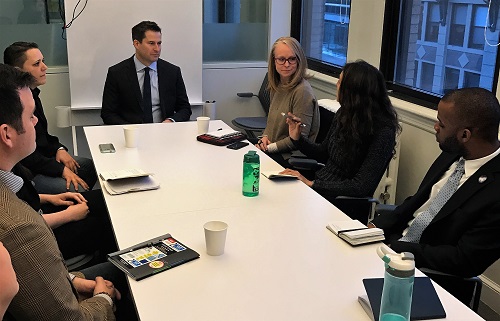 If there is one thing Congressman Seth Moulton and President Trump have in common, it’s that they both have great Twitter game. The tech-savvy Representative of the 6th Congressional District of Massachusetts recently visited New York City’s Civic Hall for an IBM Think Leaders discussion about how technology has changed government and politics. Rep. Moulton is a multi-tour combat veteran and among the best of our generation in bridging the partisan divide in Congress. Before Rep. Moulton took the stage at Civic Hall, the NYC Veterans Alliance Fellows were offered a unique and exclusive meeting with the Congressman. In January, the Fellows spent four days of intensive training in Washington, D.C., on how to run for elected office and are currently planning a NYC Veteran Candidate Workshop in April, so the Fellows happily engaged Rep. Moulton with questions. Rep. Moulton spoke candidly with us about his decision to run for office, his underdog race, and what it’s like to be a post-9/11 veteran serving in Congress. 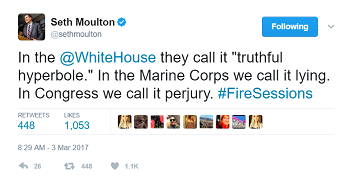 Rep. Moulton is known for his strong usage of social media

Rep. Moulton was working in the private sector in Texas before he announced that he’d be running against the nine-term incumbent, Democratic Representative John F. Tierney, in the 2014 congressional race for Massachusetts' 6th district. He told us he hadn’t intended to run for office, but a Boston-based organization New Politics contacted him and encouraged him to run. New Politics is a bipartisan organization that identifies potential candidates willing to put country before self, so they recruit and mentor veterans of services such as the military, AmeriCorps, and Peace Corps. With all 39 municipalities supporting the incumbent and no party endorsements in 2014, Moulton needed all the mentorship he could get going into the Democratic primary. Rep. Moulton told us the 2014 campaign felt like a longshot - he had no background in politics and he was running against a relatively popular incumbent in a state that prides itself in its long-serving House members. However, his military and business experience were both critical to his success and lacking a background in politics turned out to be an advantage.

Rep. Moulton told us creating campaign was similar to a startup, there are 3 main elements you need (1) building a team (2) having a strong message and (3) fundraising.  The startup theme seems appropriate for Moulton, since his campaign and his office today still feel much like startup in compared to other politicians. Rep. Moulton joked that someone once walked into his offices and insisted an intern sell them an iPhone charger because they thought they were in an Apple store. Furthermore, there is an excellent case study called Riding the Wave, written in collaboration by Open Technology Institute and New America, which looks at the digital and social media strategy of Rep. Moulton’s campaign team in 2014. The study describes how Moulton’s campaign used social media and digital tools, which were less expensive than traditional campaign advertising, to amplify his message. In addition, using modern technology added to his fresh-faced, no-political-baggage image. Moulton campaigned that he would be different, not the same old Congressman in DC - and he would be a stronger Democratic contender to hold the seat.

When asked how he felt about fundraising and how he managed it while being a sitting Congressman, Rep. Moulton compared fundraising to another necessary evil from his past: pull-ups. Moulton told us that as a Marine, it wasn’t like he was super excited to jump out of bed every morning and do pull-ups, but they were necessary and he did them because he wanted to be a Marine. He said fundraising feels like the same thing. Moulton would like to see meaningful campaign finance reform, but until then he must continue fundraising in order to continue to serve.

It is inspiring to see veterans like Rep. Moulton leading today in Congress, and getting more veterans to serve in office is something we at NYC Veterans Alliance feel very strongly about. Much like New Politics that recruited Moulton, the NYC Veterans Alliance is bipartisan and encourages military veterans and family of veterans to run for office through the Get Ready to Run Fellows program and our upcoming NYC Veterans Candidate Workshop in April. In the upcoming workshop, we will be discussing digital and social media strategy in politics, as well as the 3 essential things Rep. Moulton said you needed to build your campaign: (1) building a team (2) having a strong message and (3) and fundraising. If you are a military veteran of any era or spouse and are interested in the workshop in April, learn more HERE. 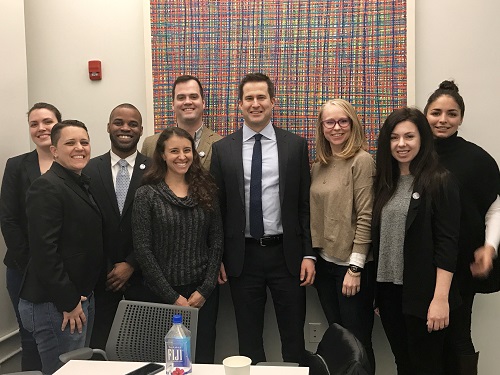