Including Veterans & Families in the City Charter 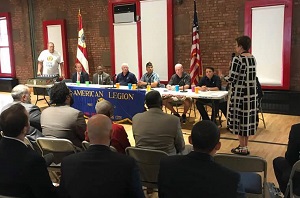 The City Charter defines in its seventy-five chapters the roles and responsibilities of our city officials, agencies, offices, boards, bureaus, and commissions. Yet as of summer 2018, only one active chapter mentions veterans, military members, and their families: Chapter 75, which defines the NYC Department of Veterans’ Services and the Veterans Advisory Board.

The City Charter revision efforts set forth by the Mayor and City Council in 2018 offer an opportunity for the whole of our city government to better reflect how integral our veterans, servicemembers, and families are to our city’s social and economic fabric by integrating our community’s needs and priorities in the City Charter.

Based on the priorities of our members and our 2018 Action Agenda, we urge the NYC Charter Revision Commission to include the following revisions:

Including Veterans, Servicemembers & Families in Mayor's Report on Social Indicators and Equity (Ch. 1, Sec. 16). The Charter mandates that the Mayor annually produce reporting for city agencies, borough presidents, community boards, and other governmental bodies on the status of a number of "social indicators," including a number of protected categories of person. The Charter must be revised to include the protected status of veterans and servicemembers, and reflect a restoration of the priority and visibility of veterans and families in home ownership, affordable housing, employment, business ownership, and other indicators tracked by the federal government and prioritized by city government in previous generations. This reporting is also reflected in other sections of the Charter, including city planning and land use policy.

Including Veteran-Owned Businesses in City Contracting Goals. Currently the Charter establishes goals for awarding lucrative city contracts to businesses owned by women and minorities. Similar to federal and state contracting programs, the Charter likewise must include veteran-owned businesses as part of these goals in its prescriptions for city procurement (Ch. 13, Sec. 311).

Strengthening the Campaign Finance Board (Ch. 46) to Improve Voter Registration and Information. Voter turnout in city elections has been low, but as an active partner of the NYC CFB / NYC Votes, we advocate for strengthening and expanding the CFB's mandate for civic engagement, voter information, and outreach. The creation of a separate mayoral office for civic engagement may have the unintended consequence of casting a partisan shadow on civic engagement by a sitting mayor, as well as either duplicating or hampering the CFB's current nonpartisan efforts to engage the public.

Following our public event inviting the veterans community to speak with the Mayoral Charter Revision Commission, held jointly with the FDNY American Legion Post with the support of staff from DVS, we encouraged veterans to provide feedback in letters and through an online portal. The final report of the Commission--available HERE--cited this meeting and recommendations from our community:

Three Commissioners—Dr. Una Clarke, Kyle Bragg, and Marco Carrión—joined an event hosted by the NYC Veterans Alliance and FDNY American Legion Post 930, which was attended by nearly a hundred New York City veterans as well as the New York City Department of Veterans Services. The Commissioners heard directly from veterans about the special role they play in the City as well as the challenges they face. (p. 17)

This Commission also heard testimony advocating that this Commission revise the Charter to assist those returning from their military service. These comments varied considerably: some called for inclusion of veterans issues in the City’s Social Indicators Report, for employment protections for veterans, and for expansion of the City’s minority and women owned business enterprise program to include veteran owned businesses.10 Others called for veterans to receive protected status if incarcerated, and called for local businesses to provide small accommodations to veterans returning to the City in recognition of their service. But these comments shared a fundamental similarity in that they underscore the importance of recognizing the experience of veterans after returning from serving their country and the contributions they make to our City. (p. 130)

The City’s Department of Veterans’ Services (DVS) also offered proposals to this Commission, recommending that the City expand the definition of the term “veteran” in Charter § 3101 to include veterans of all types, periods of service, and discharge statuses. DVS also recommended that the City amend § 3103 of the Charter to provide additional administrative and technical support and increased autonomy to the City’s Veterans Advisory Board. (p. 130)