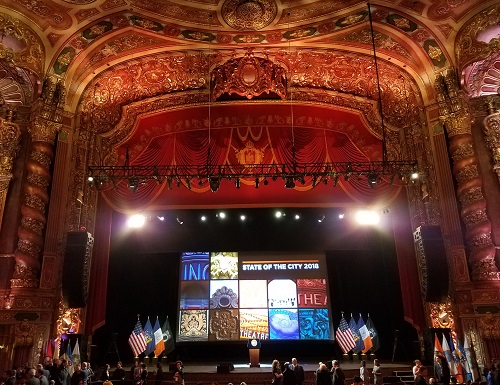 Last night Mayor de Blasio delivered the first State of the City speech of his new term of office at the beautiful Kings Theatre in the heart of Brooklyn.

Although the surroundings were lovely, we heard no direct mention of how the Mayor’s plan for NYC to become the “Fairest Big City in America” would benefit veterans and our families—which together make up at least 1 in 17 New Yorkers.

It was fitting that the Mayor paid honor to the life and family of New York Army National Guard soldier Emmanuel Mensah, who, while home on leave from Army training, responded to a horrific fire in the Bronx by entering the burning building three times. He rescued four people, yet lost his life to save them. PFC Mensah’s parents were in the audience, and received the warmest standing ovation of the entire evening as a show of gratitude for their son’s sacrifice in service to his fellow New Yorkers.

What the Mayor did not mention was his gratitude for the thousands of National Guard and Reserve troops who, just as PFC Mensah did, call NYC home, working and serving our community as citizens and public servants—yet too many of them struggle to find affordable housing and jobs that value their military service. He also made no mention of the veterans--whether they returned home from military service 50 years ago or 5 days ago--are too rarely acknowledged for their service and sacrifices, and who also struggle to make ends meet and care for their families in our increasingly unaffordable city. Our community should at least hear appreciation directly from the Mayor in a key address to the entire city.

For example, he might've mentioned that his preliminary budget proposal for FY 2019 offers modest growth for the NYC Department of Veterans' Services as it works as a young agency to develop and build effective programs that will serve the unique needs and potential of our military and veterans community. He might've also given his word that the city will make good on the expansion of tax exemptions for veteran homeowners--a needed assurance after the confusing Notice of Property Value paperwork issued in recent weeks. (NOTE: See our latest HERE on the property tax exemption.)

The Mayor did speak about his plan to strengthen local democracy, and he urged New Yorkers to get involved in voter registration and advocating for vital updates to entrenched processes, including the need to legislate early voting. Yet while he spoke of new initiatives to increase voter registration and youth participation in democratic processes, even asking audience members to fill out a postcard to pledge democratic participation—he never mentioned the excellent work NYC Votes and its partners across the five boroughs have already been doing to this precise end.

We are proud partners in the Vote Better NY coalition led by NYC Votes in a push for needed reforms to make democracy stronger and more accessible for all New Yorkers. We will likewise be advancing our 2018 policy priorities in the days and weeks to come.

Count on us to make noise this year to ensure that NYC’s military members, veterans, and families are fully acknowledged for our service and sacrifices—and that our solutions for making NYC a fairer and more democratic city are integral components of NYC policy and legislation in 2018.

Will you join us as we work to make change in NYC government for veterans and families in 2018?

If you’re not already a member, we welcome you to JOIN US and get involved in our upcoming workshops and advocacy. We hope to see you soon!