Report: Reforming the Veterans Advisory Board

In February 2015, following the start of this survey, the City Council passed legislation to reform the Veterans Advisory Board (VAB) by expanding the number of appointees, providing clearer guidance on the role of VAB members, and mandating greater transparency in the meetings and activities of the VAB. Shortly thereafter, the bills were signed as Local Laws 24 and 25,[1] and new members of the VAB were appointed by both the Mayor and the Speaker of the City Council.[2] Strong support by survey respondents for this initiative was noted at the time the bill was under consideration. A total of 80.68% of respondents indicated that they view this as either essential or very important. 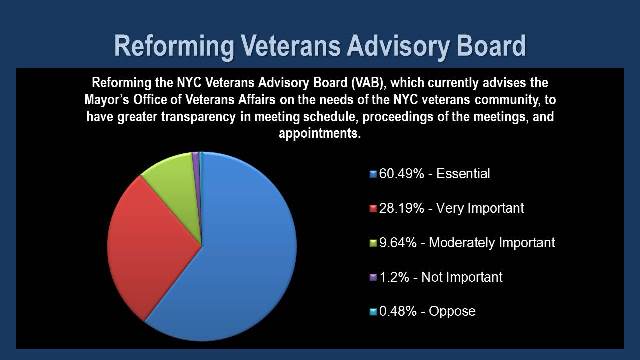 Testimony on VAB Reform. At the City Council hearing on reforming the VAB in February 2015, the NYC Veterans Alliance testified in favor of reforming the VAB, citing the strong support indicated by survey respondents at that point in time.[3] Our recommendations for reform included:

Most of these recommendations were included in the final legislation, which was signed into law in late February 2015.[4] This testimony and the reforms becoming law represents significant progress for the Veterans Advisory Board. At a press conference in March with the Speaker of the NYC Council, the NYC Veterans Alliance touted this reform as a great start for NYC veterans under the de Blasio administration.[5]

Respondent Comments. Comments from respondents on the topic of the VAB and other veterans advisory bodies included:

Recommendations. Recent reform legislation greatly improved the VAB by updating its composition and improving transparency and accountability. New VAB members have been appointed, with most starting on three-year terms. This is progress, but the work is not yet finished. We therefore make the following recommendations as the VAB moves forward with a new era of meetings and advising MOVA:

[7] See pages 71-75 of this report for information about “bad paper” discharges.