Advocates have proposed that NYC agencies work more effectively to provide outreach, services, housing, and tracking of veterans who are homeless on the streets, in shelters, living in their cars, in temporary housing situations (with friends or family members), or hidden away on rooftops and other out-of-sight areas throughout NYC because they have nowhere else to call home. This initiative ranked third in receiving the strongest support of the sixteen listed in the survey. A total of 94.13% of respondents indicated that they view improving homeless services as either essential or very important. 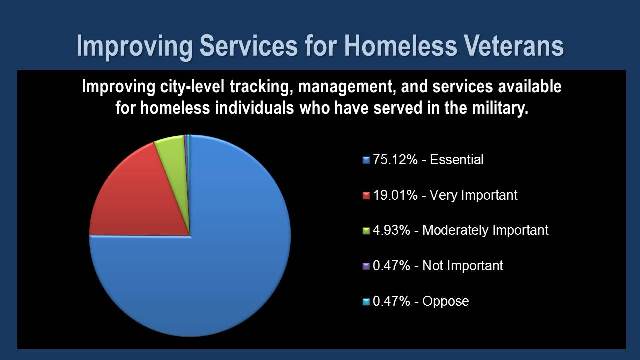 Homelessness in NYC. Overall homelessness in NYC is at an all-time high, with more than 59,000 individuals—approximately 20,000 of whom are children—in need of permanent housing.[1] This represents a 10% increase since the inauguration of Mayor de Blasio. Despite these rising numbers, veteran homeless has decreased significantly, largely due to robust federal resources that have enabled a supportive system for moving homeless veterans from the street to a shelter, then to temporary housing, and eventually into permanent housing.

Federal Funding to NYC. Veteran homelessness has received significant attention nationally, and NYC government received a grant from the Obama administration last year in the amount of $3.4 million[2] as part of a nationwide initiative to end veteran homelessness. Cities across the U.S. have participated in a targeted effort[3] in which cities receive funding and technical assistance to set and meet goals toward ending veteran homelessness by the end of 2015.[4] Veterans’ entitlements to federal services and benefits, including those who are homeless, are determined by a web of statutes and regulations surrounding discharge status and length of time served in the military.

NYC Department of Homeless Services (NYC-DHS). Resourced by federal funding received by NYC, NYC-DHS leads the Veteran Service Unit (VSU), which includes representatives from federal agencies, and exists as a triage point for homeless services, linking veterans to housing and other resources and benefits for which they are eligible. When appropriate, and if space is available, the VSU refers homeless veterans for transitional housing at one of two program shelters for veterans: Borden Avenue Veterans Residence for men and women in Long Island City and a men-only residence on Porter Avenue in Brooklyn.[5]

Direct Federal Programs for Veteran Homelessness. In addition to the funding listed above, the Obama administration has further dedicated millions of dollars[6] that go directly to providers, programs, and housing vouchers for homeless veterans.[7] These dollars do not pass through NYC government. There are several different programs, but the largest include:

Other Assistance for Homeless Veterans. Outreach teams meet with homeless individuals and ask if any of them have served in the military. These teams typically count anyone who has served in the active or reserve forces as a veteran, regardless of whether they meet the VA’s definition of “veteran.” Homeless veterans who are ineligible for the federal programs listed above due to discharge status or amount of time served in the military may be eligible for other assistance using other federal, state, or city funded programs to assist homeless individuals. Veterans who do not qualify for VA programs are often granted supportive housing through programs funded in partnership between NY State and NYC (NY/NY I, II, or III).[12] Service providers who work with homeless veterans seek out these other programs to assist those who do not meet the VA’s definition of “veteran,” and often can provide these other supportive housing options as well.

Current Progress. The Mayor’s office announced in April that fewer than 1,000 homeless veterans remained in NYC shelters, a reduction of 40% from the number of homeless veterans reported last year, and that there are fewer than 20 street homeless veterans living on the streets and an additional 30 that are chronically homeless but sheltered.[14] Mayor de Blasio has stated that his administration will end veteran homelessness by the end of 2015.[15]  The goal has been stated as “functional zero.”

Questions and Challenges. While advocates celebrate the vital resourcing and hard work that has resulted in many successes, they continue to point out gaps and areas for continued improvement, and question some of the data defining current successes. These questions and challenges include:

Recommendations. A large number of previously homeless veterans have successfully been placed into transitional and permanent housing with appropriate supportive services to help them achieve further progress. This is success worth celebrating. Yet there still remain complex and conflicting eligibility requirements that frustrate these individuals, as well as service providers within the system, and hinder many steps that would otherwise be recognized as forward progress. Too many veterans struggling with homelessness also do not make it into these systems to be counted and to receive help. We therefore make the following recommendations: