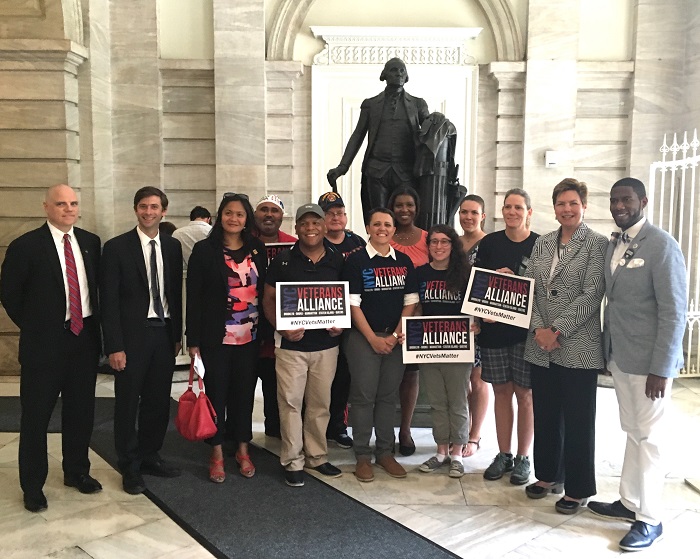 Today we were proud to stand with Public Advocate Tish James, Council Member Jumaane Williams, Commissioner Loree Sutton, and Commissioner Carmelyn Malalis to mark the introduction of the bill we drafted and proposed last spring to amend NYC's human rights laws to include protections for veterans and military members. The bill's language has been updated to summarize this as "uniformed service," and express the most inclusive definition possible. We approved this change within the last few weeks, and we are proud to be part of moving this legislation forward. Below is the statement of Founding Director Kristen Rouse at today's press conference at City Hall:

My name is Kristen Rouse, and I am President and Founding Director of the NYC Veterans Alliance. I served in the United States Army on active duty as part of the 10th Mountain Division, and also as a member of National Guard and Reserve units here in New York City. I served three tours of duty in Afghanistan, once in 2006 as an active soldier, and later in 2010 and 2012 when my National Guard units were called up for duty.

It’s a great thing to hear our fellow citizens say, “We support our troops” and “We love our veterans,” but too often when it comes to hiring a new employee or finding a new tenant—employers and landlords may assume that veterans and military members are either a risk or a problem. Veterans of any service era may be seen as too physically or psychologically damaged to be worthy of reasonable accommodation or understanding. Landlords may not understand or accept VA disability, pension, or GI Bill payments as legitimate income. Military reservists and National Guard members may be seen as risky employees because of their scheduled monthly and annual training, or because they may be called up for a period of weeks or months to serve in our nation’s defense. Reservists who have served in combat and returned to their jobs may lose seniority and benefits, and lose footing in their career trajectory when employers do not understand that protections also include equal advancement in their career as if they never left.

While the federal Uniformed Services Employment and Reemployment Rights Act—known as “USERRA”—provides basic legal protections for military members and veterans—these protections are not well known or understood by the civilian population, or even by veterans and military members themselves. And there is little actual recourse for discrimination.

Over the last year, the NYC Veterans Alliance has brought veterans, military reservists, spouses, service providers, and civilian supporters together to talk about the issues our community is facing and we’ve worked on creating solutions. Time and again, our discussion and workshops have come back to how our communities and our city policies do not currently provide basic recognition of veterans and military service. So to address this fundamental issue, we drafted and proposed a bill to add military and veteran status—summarized as uniformed service—to our city’s human rights laws.

Adding uniformed service to our city’s comprehensive human rights laws will send a powerful message to our veterans and military members that New York City supports, honors, and protects them. It will also provide a baseline for all of our city’s agencies to ensure that they are protecting veterans and reservists as employees and in the policies they implement to make our city better. Most importantly, this law will provide our veterans and military members with legal recourse right here in our city government when our rights are violated.

We all rely on our active military, and our Reserve, National Guard, Coast Guard, and State Militia members for our nation’s defense and to come to our aid and rescue when disaster strikes here at home. Our veterans have served us in wartime, in keeping the peace, and in missions that have made our nation and our allies safer and stronger. Our city must have the backs of all those who have served, and who continue to serve in uniform—not just in words and sentiment, but in tangible policies and legal protections through all areas of life where they have faced discrimination.

Together we are working to make New York City known not just for attracting our nation’s best and brightest citizens to live and work here—but also a city that attracts, protects, and honors military service—past, present, and future.