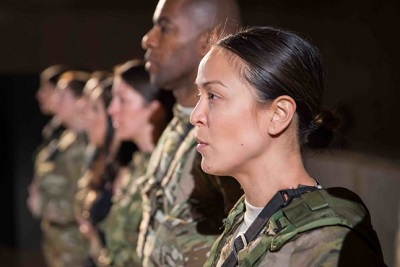 Bullet Catchers, an evocative, elemental play-meets-movement piece-meets-a cappella performance directed by Julia Sears, succeeds in a way that no other play I’ve seen in the past two years has, and for so many reasons.

Seeing Bullet Catchers the day after Donald Trump attempted, in a series of tweets, to ban transgender men and women from the armed forces and fire those already serving made for a poignant experience from the moment I walked into Judson Memorial Church last Thursday. While waiting for the show to begin, audience members play vintage table hockey in the back, away from the floor stage; cost of drinks is “recommended donation.” Under the lofted ceiling, the set design is as minimalist as you can get: six white plastic masks arranged in the middle of the floor, and two long boxes upstage.

The jarring visuals—so at odds with the space itself, all stained glass windows and Corinthian columns—and the absence of pews allowed for a vastly different kind of congregation to assemble and fill the empty space in between the church’s ribs: women, mostly, a few with their husbands and partners, all of varying types. Veterans and civilians comingled.

Bullet Catchers wastes no time. From the outset we are confronted with the fact that this is a story about women and their relationship—literally, and figuratively—to war. In a powerful opening monologue, Ares’ daughter, Até, demands she be seen as the embodiment of what historically has been the province of men. “Father,” she cries, “I will be the face of War.”

What follows is one of the most engaging, genuine, provocative, and humbling pieces of theater I’ve seen in years; I had to stay seated for five minutes after the lights came up to decompress. In a sea of military narratives centered on and around men in combat, in leadership positions, and in the world, the pivot to women in Bullet Catchers—hard women, angry women, tough and scared and traumatized and loving and vibrant, powerful women—is like a tall sail snapping in a stiff breeze: it shocks you instantly from complacency with the force of its power. It leaves you changed.

The play itself has a relatively simple premise—set in the near future, another surge requires the immediate and complete integration of women in combat roles. No hedging, no foot-dragging: more troops are needed, so more troops they’ll get. The squad we follow from training into combat is a microcosm of the Army at large, with all its internal struggles and persistent gender politics, led by a lieutenant colonel determined to be the first female officer to take an integrated team of six (four women, two men) into combat. Até has chosen her for greatness, to be a champion for women who war, but the brass (disembodied male voices, omnipotent and unassailable) dog her every step of the way. Of course, when her team is deployed, everything else falls away: there is the mission, and nothing else.

The cast of characters is, on its face, the usual rag-tag bunch of soldiers—types we’ve all met in film, literature, and on stage before. The only difference here is, they’re women. We still get Sergeant Hard-Ass, and Private Zero-to-Hero, and Lieutenant First Timer, and Sergeant Bleeding Heart—all the usual suspects. Some are married, some are divorced, have families, secrets, PTSD; but their great strength rests in the singular voice they create together, whether in speaking or in song or in sublime movement, which they use to argue emphatically against the men around them and among each other about the efficacy of integration and its effect on unit cohesion. To hear it said here is to get their side of the debate in full, from women who know their worth and seek to take their rightful place in the all-too-human act of warfare.

These are whole people. If anything, the men in Bullet Catchers are the ones most kept at arm’s length, relegated to two soldiers—a posturing man’s man with a crush and a sensitive bumpkin blindsided by his wife filing for divorce while he’s deployed—and the disembodied brass.

Bullet Catchers understands to its core that women’s voices in the armed forces, veterans and active service members alike, have been kept quiet for too long, or are altogether ignored in favor of their male colleagues. The creators and performers, a pitch-perfect combination of currently serving, veteran, and civilian artists, know that those of “the fairer sex” are as capable of brutality, rage, and hubris as men; that they are not as fair as people have been led (and have led themselves) to believe. Bullet Catchers makes a simple statement, profound in its simplicity: that being capable of fighting in war does not make women like men—it makes them women, equal. Period.