Mayor de Blasio seems to think that veterans are too expensive to receive the benefits they've earned. Today we learned that he has issued yet another Memorandum of Opposition to the Veterans Equality Act--this, after he held a special press event just before Memorial Day to announce that this time he would support it. Which is it, Mr. Mayor? 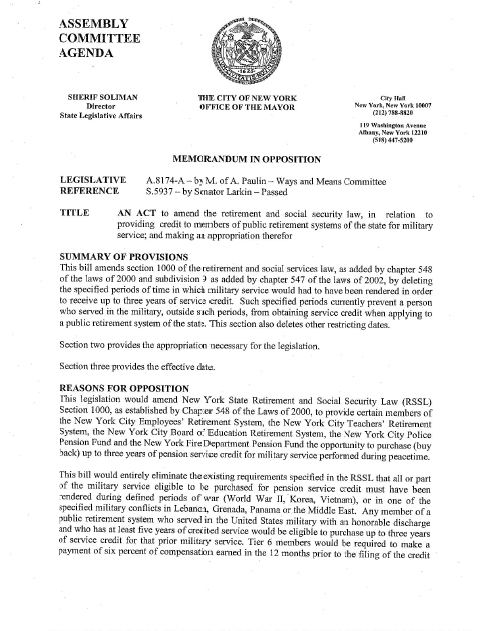 Mayor de Blasio's new Memorandum of Opposition against the Veterans Equality Act--less than a month after his public announcement that he would support it.

On May 21, Capital New York reported:

The closed-press roundtable meeting at City Hall, which was attended by Mayor’s Office of Veteran's Affairs commissioner Loree Sutton and members of the Veterans Advisory Board, was also held to announce de Blasio’s support for the Veterans Equality Act—a bill in Albany that would qualify Afghanistan War veterans who are also public employees to “buy back” up to three years toward their pension based on their military service.

Last year, the Veterans Equality Act was passed by the state Assembly and Senate but vetoed by Governor Andrew Cuomo after de Blasio expressed concerns about how much it would cost.

Now, as of this memo dated June 19, 2015, Mayor de Blasio again opposes the Veterans Equality Act. This latest action from Mayor de Blasio comes as yet another disappointment, and it deepens further to strike us as an insult. Mayor de Blasio made much ado about his special press event for Fleet Week, although it is now clear this was just an empty attempt to drum up support from veterans in anticipation of Memorial Day. Now that the parade and media attention has passed--he has completely reversed the one paltry promise he made to us.

NYC Veterans, we need to do all we can to ensure the Veterans Equality Act passes in the New York State Assembly. We need to let Governor Cuomo know we want him to sign it. We need to let Mayor de Blasio know that his numbers are faulty and his position that benefits for veterans cost too much is simply wrong.

The Assembly will resume its extended session midday tomorrow, so we need to act fast. Please do these things at your earliest convenience:

For background on the Veterans Equality Act, below is a preview of our Report on the 2015 Survey of NYC Veterans Policy Priorities that will be released later this week. This report section specifically addresses the responses of the veterans and community members who took the survey in February and March on this subject. The information and recommendations included below are current up to Mayor de Blasio's Memo of Opposition. 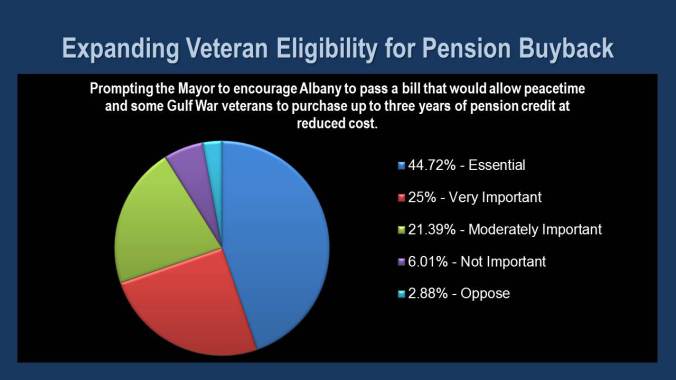 November 2014 Veto. Last year, the NY State Assembly and Senate passed legislation that would extend veteran eligibility for purchasing up to three years of pension credit at a reduced cost. The intent of this legislation was to update eligibility requirements for combat veterans beyond the eras and geographic localities of existing law, as well as extending it to some non-combat veterans that parallels existing eligibility for veterans who served during the Vietnam era but not in direct combat. Despite legislation passing both the NY State Assembly and Senate, Mayor de Blasio lobbied Governor Cuomo to veto it, citing concerns that it was too great a financial burden on the city. Governor Cuomo vetoed the bill last November.[1]

Statement of Support by Mayor de Blasio. In a press conference during Fleet Week and in anticipation of Memorial Day, the Mayor announced a reversal on his position. He stated that he would support current NY State legislation entitled the Veterans Equality Act,[2] which would extend eligibility for Afghanistan veterans. It is unclear whether Mayor de Blasio would support a bill that extends eligibility for more currently excluded veterans than those serving only in Afghanistan.

Current NY State Legislation. As of the publication of this report, NY State Senate bill S2124[5] was unanimously passed by the NY State Senate. The corresponding NY State Assembly bill A8174[6] was pending in the Assembly’s Ways and Means Committee. Both bills are “All Veterans” versions, and would update existing legislation by removing a large volume of restrictive wording that describes dates of military conflicts and geographic areas that would then need to be continuously updated to ensure all combat veterans would be eligible. The bill also extends eligibility to include peacetime and stateside veterans, which is consistent with prior inclusion of all veterans during designated pre-1975 conflict periods, regardless of the geographic location of their service. In effect, all honorably discharged veterans who served on active duty would be eligible to purchase up to three years of pension credit. 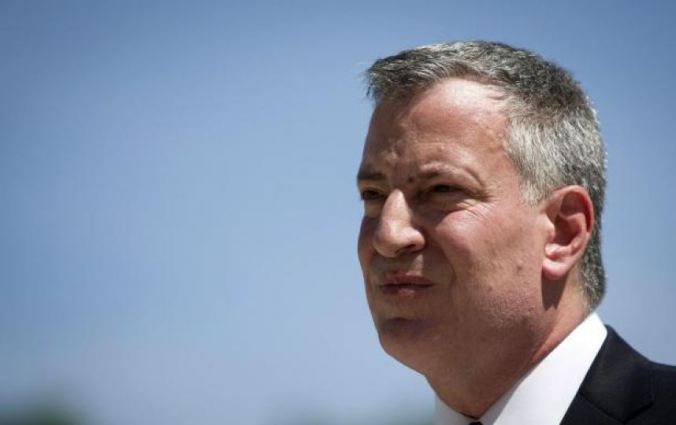