On June 16, Kristen L. Rouse testified at the City Council Veterans Committee hearing on a proposed resolution to recognize the month of June as Post-Traumatic Stress Disorder Awareness Month in New York City, which parallels a U.S. Senate resolution recognizing the same nationally. Last week we stood with Veterans Committee Chair Eric Ulrich, MOVA Commissioner Loree Sutton, and veteran leaders and advocates on the steps of City Hall, united in the cause of supporting this important resolution. We further offered the following testimony: 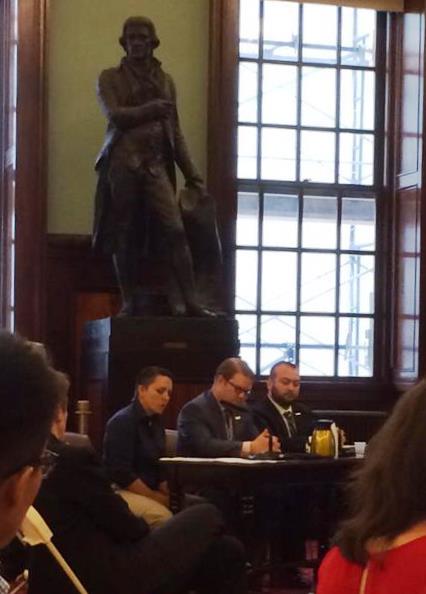 Hearing on Proposed Res. No. 747-A: Resolution recognizing this and every June as Post-Traumatic Stress Disorder Awareness Month in New York City

My name is Kristen L. Rouse, and I represent the NYC Veterans Alliance. I am a veteran of the United States Army, and I served three tours in Afghanistan.

I’ve experienced firsthand how military deployments can be life-changing, and how multiple deployments in a short span of years magnifies these effects even further. I found that traumatic stress is a constant part of the deployed environment—there is the persistent threat of enemy attacks, whether on foot patrol, in a convoy, during air travel by helicopter or C-130, or even when sitting at a desk or sleeping in a bunk on a large base. We all have stories of friends and colleagues who were lost or injured during the course of our one or many deployments. It was our duty to be continuously vigilant, and many of us survived violent, life-threatening events.

While it is impossible to summarize the very different and very complex experiences of the countless troops who have served in our nation’s wars, we can identify a common factor in the return and readjustment of a large number of troops—the process of down-ramping from this escalated vigilance, resuming our normal lives in relative safety, and moving forward from the traumatic experiences of war.

I am not a clinician, but I can say—as a veteran and as an advocate who works alongside veterans of many generations—that this down-ramping and resuming of normal life can itself be a years-long or even lifelong process. It can be isolating. It can be desperate and debilitating. It can make us feel sometimes like we want to quit—to quit on things that are important to us, like our jobs, our school, our work or career trajectory, our relationships, or maybe even our lives. None of us can make this readjustment and deal with post-traumatic stress by ourselves. It takes peer support, the support of those who love us, and the understanding of our community and our government on whose behalf we went to war in the first place.

We fully support Resolution 747-A to recognize this month as Post-Traumatic Stress Disorder Awareness Month not just nationally, but here in our home city. Post-Traumatic Stress Disorder is the name we may give to a broad range of complex, intertwined symptoms that individuals may experience after trauma, and many of us see it less as a disorder than a normal response to abnormally violent or horrific experiences. We applaud the efforts of the many individuals and organizations represented in this room who work each day to let those struggling with post-traumatic stress know that they are not alone, and to offer strategies, treatment, and meaningful activities, community support, and opportunities for continued service that allow veterans to move forward with fulfilling and productive lives.

But right now, too many veterans are still in crisis. Twenty two veterans each day in this country take their own lives, and the vast majority of them are veterans of older generations. These were the veterans who came home to a country who didn’t understand their experiences, and a government that either couldn’t or wouldn’t provide the resources they needed and deserved after their service. These older generations did the hard work of giving PTSD a name and building many of the resources we have today. Yet still far too many veterans were lost along the way, and many continue to struggle in isolation, devoid of the support they never received when they came home, and feeling abandoned yet again by government and nonprofit resources that are directed only at a new generation of veterans. We cannot forget the veterans who came before us, and we must include them in all new programs, services, and resources for veterans.

It is the solemn responsibility of government officials, both nationally and locally, to lead the way not just on bringing awareness to the struggles of veterans suffering from PTSD, but more importantly in taking action to find the veterans who are still suffering in isolation and bring them into a network of resources where they can find treatment, community, assistance with rebuilding their lives, and a renewed sense of purpose. We need action with a clear, coherent plan—and appropriate funding—to provide outreach and connect veterans, regardless of era of service or discharge status, with network of local resources that goes beyond the limitations of those offered by the VA. We need action that coordinates and leverages local organizations, strategies, and solutions to serve our fellow New Yorkers in the ways that only New Yorkers can provide. When given the right resources, veterans of every generation are fully capable of transforming their wartime experiences into what many call post-traumatic growth. Statistics show that when we have a sense of purpose, we go on to serve our communities as highly motivated leaders and engaged members and participants in public service, business, nonprofits, the arts, and any number of other areas vital to the success of our city and our nation.

It is absolutely vital to send the clear message—as this Resolution does—that veterans can’t quit, no matter how long ago they served—and that they aren’t alone in their struggle. We strongly endorse this Resolution, and call for it to be followed by concrete action, resourcing, and funding from the whole of New York City government to help all veterans who are still struggling.