"This legislation codifies into law an executive order I signed in 2008 requiring City agency heads to designate an employee to serve as a liaison to veterans employed at their agencies.  These liaisons will advise veterans on benefits and services that they may be eligible for, as well as personnel policies that apply to them."

Commissioner Loree Sutton stated in the hearing that the Veterans Liaisons at each agency also respond to veteran inquiries from the public, although it is unclear where this is role is defined. Our testimony focused on the Veterans Liaison role of advising agency employees, as well as the separate requirement for a Military Liaison at each agency. 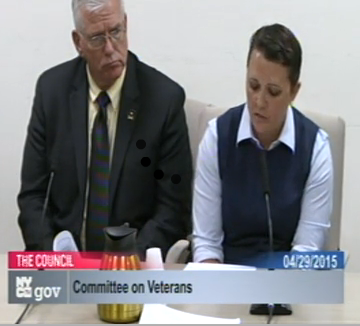 Testimony on Oversight of NYC Agency Veterans Liaisons on April 29, 2015

Our testimony is below:

Hearing on Oversight of Veterans Liaisons at City Agencies

My name is Kristen L. Rouse, and I am speaking on behalf of the NYC Veterans Alliance. I am a veteran of the United States Army, and I served three tours of duty in Afghanistan. I was employed by New York City government for nearly six years, a period of time that included two of my deployments to Afghanistan as a member of the National Guard. As a former city employee, I found the city to be a good employer for veterans and military reservists. But it is also important to note the areas where the city can and must do better for its veteran and military employees.

New York City government is the largest employer in NYC, and it is also the largest employer of veterans in the city. If NYC government committed itself also to being the best employer of veterans in the city, it would have a tremendous impact on the lives of a significant number of veterans. NYC government can and should be a model for other employers to follow when it comes to ensuring veterans and military reservists receive the full protections and benefits afforded by federal, state, and city laws. It should also make veterans and military reservists feel that their service and experience are valued assets in city employment.

When I first started employment at a New York City agency in 2008, I found that my military experience was valued by the supervisor who hired me, and I felt welcomed to transfer the skills I learned in the military toward my civilian employment with the city. My agency’s Human Resources director thanked me for my service, and she also informed me that as a military reservist, I was entitled to 30 days of military leave if I needed it, and she also explained to me that if I had any extended absence for military duty, I would still accrue regular leave days and retain my health and retirement savings benefits while I was away. These were great benefits that made me feel supported in my part-time military service. Also early on in my employment, my agency’s commissioner told me personally that he believed veterans and reservists make great employees, and that he appreciated my service. All of this was very important and very personal to me, and I firmly believe this represents the best of what city service can offer veterans and military reservists. I was not aware, however, that my Human Resources director was appointed specifically as my agency’s Veterans Liaison, or that another member of my agency’s Human Resources department was appointed as my agency’s Military Liaison, or that I should go to them with other issues related to my veteran status or military service.

Following my first year of employment with the city, I deployed to Afghanistan with the National Guard. My commissioner was very supportive, as was my Human Resources director, and many of my co-workers, too. I spent nine months deployed in a forward area in Afghanistan’s eastern mountains, and it was a very tough tour for me. I was glad to come home to a job that was familiar and where I could fit back in with my team, and I loved my service to the city. But within two or three months following my return, two of my colleagues were promoted into positions over me—one of whom started employment the same month as I did. Even though my supervisors were fully informed that my work in Afghanistan in many ways advanced my civilian work skills and related to my work for the city, I was told that my colleagues were being rewarded for the work they did during my absence, and that I would be evaluated on the work I did when I was present. Only years later did I actually understand USERRA laws to realize that it was a violation of federal law to deny me the promotion, seniority, status, and pay increase that I would have received had I not been away for military duty and performing at the high level reflected in my annual employee evaluations.

In the years that followed, I found that my direct supervisor could be difficult about my military absences, despite my giving him advance notice, and I continued on for nearly five years without a promotion or pay increase. Despite my consistently positive performance evaluations, I was told that it was because I had not been present to perform at the same level as my peers who were being promoted and given raises. My agency Veterans Liaison was always friendly to me, and she always forwarded me flyers from MOVA announcing career fairs and commemorative events. All the while, I never fully understood the protections I was entitled to under USERRA, and I grew upset and discontented working at my agency because I felt I was being penalized for being absent from city service because I had been present for military service during a time of war.

NYC government can and must do better than this, and there are low-cost and no-cost ways to make sure that no veteran or military reservist ever feels that their service isn’t valued, or that they’re being left behind, or that they’re otherwise being penalized or discriminated against for their military service. To this end, we offer the following recommendations:

If NYC government officials say they prioritize employment for veterans, they must first set the example by making NYC government the best employer of veterans and military reservists that it can be. Agency Liaisons play a critical role, but are just one component of this larger goal.