On Thursday, December 10, veteran leaders and advocates from across NYC were invited to attend a ceremony aboard the Intrepid Sea, Air & Space Museum, where Mayor Bill de Blasio at last signed into law the bill creating a NYC Department of Veterans Services (DVS). 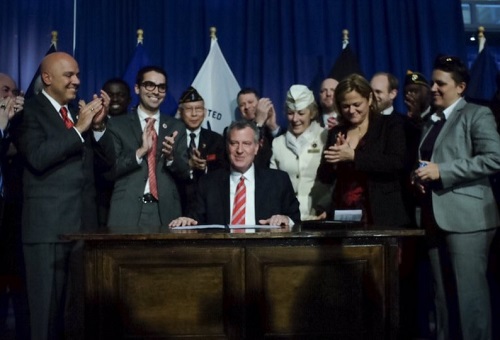 NYC Council Speaker Melissa Mark-Viverito spoke, along with Council Member Eric Ulrich, Chair of the Veterans Committee and sponsor of the bill, as well as Council Member Paul Vallone, who also serves on the Veterans Committee. Commissioner Loree Sutton, who will preside over the new Department, also spoke, crediting the NYC Veterans Alliance, as well as Iraq and Afghanistan Veterans of America, as the "grit" that helped push the bill to passage. Mayor de Blasio spoke, noting the importance of serving NYC's veterans, and that he stands in full support of the new Department.

It was a long journey for this bill to become law, and it took the work and dedication of many advocates over the years to make it happen. In recent months, the NYC Veterans Alliance has made a strong, compelling case for why an independent agency serving our city’s veterans and family members was the infrastructure needed to streamline and coordinate veterans’ services across the City’s over 100 agencies, as well as between state, federal, and nonprofit agencies serving our veterans community.

We thank Council Member Eric Ulrich for his steadfast commitment to moving this legislation forward, and we thank Speaker Mark-Viverito, Public Advocate Tish James, Mayor de Blasio, and Commissioner Sutton for their vital support in ensuring its passage. We believe this has the potential to position NYC as the nation’s leading veteran-friendly city, attracting veterans just as it does aspiring artists, writers, entrepreneurs, and leaders – and we hope to see veterans of all eras continuing to rise together to make this city greater, stronger and more vibrant than ever. With the support of the NYC Department of Veterans’ Services and continued prioritization of veterans by our city government, we can make this a reality.

There were 14 members of the NYC Veterans Alliance present at the ceremony, representing the Alliance as well as the numerous organizations they lead and participate in. This is a huge win for the Alliance's first year of advocacy, and we are proud to be bringing together our community and making significant steps toward making NYC the best city in the country for veterans. We have much work ahead of us--but together we will achieve great things for our community.