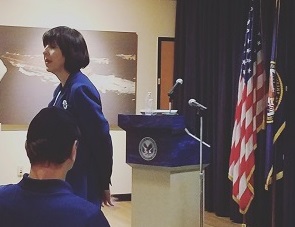 This week, we're able to bring our community updates on the VA NY Harbor Healthcare System (VANYHHS), which includes the Manhattan and Brooklyn VA Medical Centers. We are grateful to Congressman Dan Donovan for his leadership in bringing the concerns of Brooklyn and Staten Island veterans directly to VA Secretary Robert Wilkie and VANYHHS Director Martina Parauda. With his office's permission, we are including the notes from his recent meetings here. Also included below are notes on this week's Town Hall with Director Parauda at the Manhattan VA.

Congressman Donovan met with VA Secretary Robert Wilkie on October 5, 2018. Here are notes from his office on that meeting:

The VA is reaching out to local NYC medical institutions in order to get another internship program so as to ensure there will be no more staff shortages in the future at the Brooklyn VA.

Secretary Wilkie stated that they are working to fix the overall problem of staff shortages in the VA. The MISSION Act will help by incentivizing medical school graduates to take jobs with the VA through loan forgiveness. Additionally, they are increasing their outreach to DOD physicians to get them to come and work in VA hospitals as well as raising wages for highly skilled physicians.

The Secretary explained that he is working with Secretary of Defense Mattis on an extensive plan to ensure that all members of the armed forces become added to the VA system upon their return.

The Secretary will be visiting the Brooklyn VA in January/February 2019.

Congressman Donovan met with VANYHHS Director Martina Parauda on August 22, 2018. Here are notes from his office on that meeting:

In light of what happened with the ENT Clinic, Director Parauda met with Dean of SUNY to find out if they had plans to pull out of any other programs. She was assured that they had no plans to do so. However, the Dean has since resigned and she was going to follow-up.

According to Director Parauda, the construction for the new ORs will be complete by December at which time there will be 4 new ORs. She also stated that there will be a temporary MRI housed in a trailer on site. The temporary MRI should be operational by the first full week in November. A new permanent MRI will be in place in one year.

According to Director Parauda, PTSD psychologists will be fully staffed in September, and also that thee shuttle between Brooklyn and Manhattan is fully staffed and operational.

Director Parauda stated that the Choice Program will be replaced by the Veterans Community Care Program which came about as a result of the MISSION Act. As a result, there will be no private companies handling referrals to private medical providers. As of October 1, 2018, there will be no intermediary company doing referrals. The VA will handle this in house. She spoke about the relationships that the VA has with Bellevue and NYU and other medical institutions where they presently direct referrals and that they will continue to do so.

On October 25, 2018, VANYHHS Director Martina Parauda held a Town Hall at the Manahattan VA to address the questions and concerns of patients.

Director Parauda stated that the goal of the VANYHHS is to keep veterans within the VA for care. She updated attendees on the VA Mission Act, which is to be fully implemented by June 6, 2019. The VA Mission Act expands VA Choice, which allows veterans to seek private care if the VA cannot meet their medical needs. Director Parauda stated that she is working with NYU, Columbia, and other doctors on their willingness to accept VA payment.

Director Parauda also discussed how the Manhattan VA used to send patients to outside providers for Physical Therapy. They have since enough Recruited Physical Therapists to meet the need in house.

She also discussed that the Manhattan VA is currently a tele-medicine provider for the entire country. The VA making big push for tele-health for Primary Care Providers, to keep up with current technologies. She stated that the VA's biggest competitor in this area is the private sector.

Patients attending the Town Hall brought questions about women veterans who feel that the Manhattan VA is not adequately providing for their safety and privacy. They also raised issues about continuity of care between the many residents rotating through the hospital and a lack of contact with the attending physicians who oversee the residents. Director Parauda mentioned that every patient being seen by a resident has a right to speak with the attending physician, and that they should ask if they have any concerns. When asked about employee accountability, Director Parauda discussed a customer service initiative by the VA to change the culture for all employees called "Own the Moment," which incentivizes each employee to take responsibility for patient care in the moment rather than passing it off to another step or person in the VA's bureaucracy.