VA Must Welcome ALL Veterans 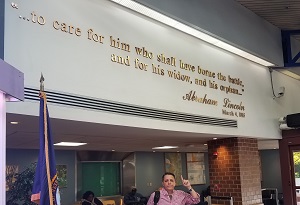 At a time when the VA itself is reporting that 70% of veterans who have died by suicide have not been in recent VA care, and that women veterans in particular are nearly twice as likely as other veterans to die by suicide--it is essential that the VA do all that it can to mitigate the crisis of veteran suicide by ensuring that ALL veterans are welcomed in to receive quality care.

While the VA has made great strides in making programs and care more accessible, the VA has nevertheless firmly resisted the most basic way of welcoming in all veterans--to simply acknowledge them in the VA motto.

When Abraham Lincoln made his Second Inaugural Address in March of 1865, before the Civil War had yet ended, he said:

With malice toward none, with charity for all, with firmness in the right as God gives us to see the right, let us strive on to finish the work we are in, to bind up the nation's wounds, to care for him who shall have borne the battle and for his widow and his orphan, to do all which may achieve and cherish a just and lasting peace among ourselves and with all nations.

The Confederate army had not yet surrendered, and hundreds of thousands of men--and a documented hundreds of women who served in uniform by passing as men, as well as women who served in medical and other non-combat roles on both sides of the conflict--were still losing their lives on the field of battle. In April of 1865, Dr. Mary Walker, a New Yorker who volunteered to serve as a Union War Department surgeon, was taken prisoner by Confederate forces; she would later be awarded the Medal of Honor for her service and bravery.

Although Lincoln's words will forever live on, sealing our nation's commitment to internal peace and unity, as well as our government's commitment to care for those who have "borne the battle"--the limitation of using "him" as a pronoun nevertheless renders invisible women's service not only in the Civil War, but also in all of our national conflicts going back to 1776.

As we continue to hear stories from women veterans who have felt invisible, alienated, harassed, discriminated against, or that their service is somehow minimized or dismissed while trying to access VA care--it is the position of the NYC Veterans Alliance that it is time for the VA to change its motto and signage to ensure that women veterans are acknowledged, welcomed, and valued equally at all VA facilities.

Last week, Founding Director Kristen Rouse attended a high-level meeting in partnership with Iraq and Afghanistan Veterans of America with VA Acting Deputy Secretary Jim Byrne and Dr. Richard Stone, Executive in Charge of the Veterans Health Administration, in which she addressed the problem of women veterans who are not receiving VA care due to discomfort and alienation. This, in addition to myriad concerns about burn pit treatment, limitations to accessing services at the Brooklyn VA, and other matters important to our membership.

"The VA motto will change eventually," she said to VA leaders. "It's only a matter of how many veterans you are willing to alienate before that change comes," she said. Acting Deputy Byrne and Dr. Stone brushed this away and the meeting abruptly came to an end.

We may be swept out of VA headquarters, but we will not stand down. Today, the NYC Veterans Alliance proudly joined with IAVA and Service Women's Action Network (SWAN) in submitting a formal petition to the VA, with the aid of Yale Law School's Veteran Legal Service Clinic, asking the VA to change the motto through its rulemaking process. The full petition can be viewed HERE.

All veterans must feel equally able and welcome to seek the services they have rightfully earned at all VA facilities. Changing the VA motto and signage is the simplest way to show the VA's commitment to this--and to set the tone with all 300,000+ VA employees that they are there to serve not only "him"--but all those who have borne the battle. The VA must continue to step up for all veterans. It must exhaust all efforts and resources to avert the crisis of veterans dying by suicide at twice the rate of our civilian counterparts. Welcoming and acknowledging ALL veterans is a simple first step.