Ensuring the Right Oversight of City Services for Veterans 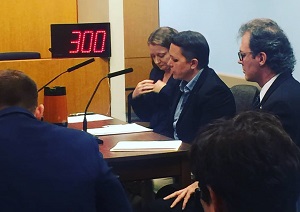 On October 29, 2018, NYC Veterans Alliance presented testimony before the NYC Council Committee on Veterans in a hearing on oversight of ensuring veteran access to City-administered services. The hearing also considered Introduction 1118, which would require the Department of Veterans’ Services (DVS) to submit an annual report to the council including specific personnel and performance indicators. Specifically, DVS would be required to report on the number of employees serving in each title within the agency as well as the services provided by each title. In addition, this report would include an accounting of the number of veterans who received services from DVS as well as how veterans and their families learned about the services provided by the agency.

Good morning and thank you to Chair Deutsch and the Committee for the opportunity to testify today. My name is Kristen Rouse and I am an Army veteran with more than 24 years in service, including three tours of duty in Afghanistan. I am President and Founding Director of the NYC Veterans Alliance, a member-driven, grassroots policy advocacy and community-building organization that advances veterans and families as civic leaders.

On behalf of our members and supporters, we state our strong support for this committee providing oversight of the services provided to veterans and their families by DVS and other city agencies, programs, and funding. We are, however, uncertain of whether Intro. 1118 or other recent bill proposals will effectively accomplish the oversight and accountability that our community has called for and deserves.

In February 2015, I stood beside members of this committee—including Council Members Vallone and Eugene—in a City Hall press conference to laud passage of Local Law 23-2015,[1] which mandated annual reporting on the number of veterans receiving services from city agencies, including NYC Housing Authority (NYCHA); NYC Department of Housing Preservation and Development (HPD); NYC Department of Consumer Affairs (DCA); NYC Department of Health and Mental Hygiene (DOHMH); and the NYC Department of Citywide Administrative Services (DCAS). These agencies were tasked with tracking veterans involved in Mitchell Lama housing applications, vending licenses, housing vouchers, city procurement, and city employees. Local Law 23 was a vital step toward making veterans more visible in how our city tracks and quantifies city services. It wasn’t perfect, in that veterans receiving help from HRA and other agencies were omitted from this bill—but it nevertheless ensured that data on veterans would be captured and reported by some of our largest city agencies.

Later in 2015, we advocated for the creation of an independent city agency overseeing veterans’ services, stating the need that our community saw for this new agency to play a vital coordinating role in how the city delivers and accounts for services to veterans and their families at taxpayer expense. The establishment and growth of DVS has been a tremendous benefit to our veterans community, but an agency limited in size must be empowered in its scope to synchronize and manage the city’s efforts to reach, serve, and be accountable to veterans and their families.

The intent behind bills heard today and last June—to bring accountability for DVS in the veterans and family members it is serving—is good. But even better would be for this committee to examine ways it can empower DVS to accomplish its mission.

To this end, we pose the following questions to this committee:

1) Will you make public the reports of NYCHA, HPD, DCA, DOHMH, and DCAS on the number of veterans it has served since Local Law 23-2015 was implemented? And will this reporting be made visible in the Mayor’s Management Report (MMR) and/or other essential citywide reporting?

2) Will new legislation ensure that the city’s contracting and management of VetConnectNYC[2] will effectively track services, referrals and referral methods, follow-up metrics, and other key access and accountability data for veterans and family members seeking resources from DVS and other government and community-based organizations?

3) Will legislation include a provision for a dedicated Agency Chief Contracting Officer (ACCO) to manage the city’s contracts for veterans’ services—to include not only VetConnectNYC, but also the $2.3 million in discretionary funds granted by the city to community-based organizations for the purpose of serving veterans and their families?

4) Will new legislation ensure that DVS would not need to duplicate reporting already included in the MMR,[3] budget documents, other existing public information and open data on its activities, staff, and salaries[4]?

5) Also related to prior legislation—is this committee still overseeing the Veterans Advisory Board? As the city’s only chartered body of veterans advising city government, the VAB currently has eleven members serving on terms that expired last year and early this year. The VAB did not meet its mandated five meetings last year, and it has held three public meetings without quorum or current appointments.