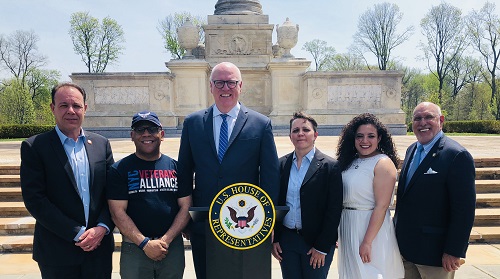 Building on the progress we made last year to enshrine protections for veterans and military members in NYC law with passage of Local Law 119-2017, NYC Veterans Alliance today stood in support of a new bill being introduced by Congressman Joe Crowley (NY-14) to protect student veterans using GI Bill benefits from housing discrimination nationwide.

We gathered for a press conference at the stunning Bronx Victory Memorial in Pelham Bay Park, which commemorates the troops from the Bronx who lost their lives in World War I. Joining Rep. Crowley was NY State Assembly Member Mike Benedetto, Assembly Member Nathalia Fernandez, Council Member Mark Gjonaj, and members of the NYC Veterans Alliance.

Dubbed the "Students LIVE (Live Irrespective of Veterans Educational Assistance) Act," Rep. Crowley's bill proposes to amend the Servicemembers Civil Relief Act to prohibit discrimination against veterans on the basis of their VA educational benefits as their source of income. We fully support this legislation as a national extension of protections we worked to emplace here in NYC, and it advances the policy priorities set forth by our members for this year.

Speaking on behalf of the NYC Veterans Alliance was Founding Director Kristen Rouse. "As a New Yorker, and as a veteran who has returned home to New York after multiple tours of duty in Afghanistan," she stated, "I know how hard it is to come home and find good housing and affordable housing."

Rouse noted the challenges veterans face in difficult housing markets like NYC and other cities across the country, and that a significant impetus behind the Alliance's work on Local Law 119 was the discrimination faced by veterans and families who were told by landlords who either don't understand or don't want to accept VA benefits as legitimate income. "We need landlords to understand that it is vital to welcome veterans back into our communities and prevent that kind of discrimination across the board," she said of landlords both in NYC and nationwide.

She further remarked that she looks forward to working with legislators on other legislation to benefit veterans and families. "It is wonderful to be thanked for our service, but we must have tangible action."

We are pleased to report that this press conference punctuates our successful initial push to advance our 2018 Action Agenda, and we have secured agreements from several legislators at the city, state, and federal levels to support our work--stay tuned for more announcements in the days and weeks to come!