This past Wednesday, it was announced that Bryan Doerries has been named the new Public Artist in Residence with the NYC Department of Veterans’ Services and NYC Department of Cultural Affairs on a 2-year grant of $1.3 million to fund artistic productions of ancient Greek drama that bring veterans and civilians together in community dialogue and healing. 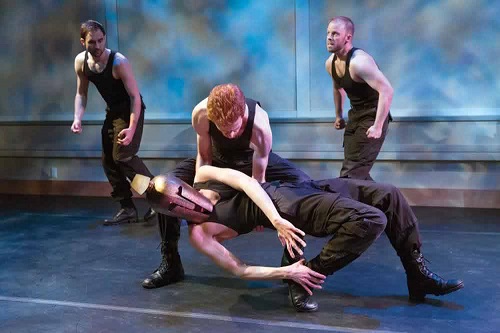 We commend the NYC Department of Veterans’ Services for their commitment to promoting public dialogue on veterans issues through the arts. Those of us who have taken part in our community’s amazing and diverse artistic productions in recent years can attest to the transformative power of art and dialogue in our own lives. Yet we are concerned that this large grant and public program elevates an artist and production model that, although outwardly successful, are yet notable for specific problem areas:

Furthermore, this large grant and public partnership (for which there was no open call for proposals or review) appears to be duplicating or recreating (or, at worst—copying) the work that a number of theater companies and organizations and veteran artists have already been doing across NYC, and in ways that have been more meaningful and beneficial to veterans and community members than the work that Bryan Doerries has done to date. The effect of having NYC government’s stamp of approval is that Bryan’s productions will have preference over this other work—and over a two-year period, this may have adverse effects as these smaller, yet impactful productions seek audiences, venues, funding, and support.

Contrast Bryan Doerries’s productions with Aquila Theatre, for example. Founded by a former Royal Marine, Aquila has been exploring the relationship between modern war and Classical theater since 1991. Aquila originated programs to have veterans and civilians in dialogue about war and Classical theater in 2008, and their programming has grown with the community they’ve created in NYC through their Warrior Chorus program, which has involved (and paid) veterans in all aspects of theatrical productions of Classical drama, from consulting and writing to acting, singing, dancing, and managing productions that have traveled across the country and abroad. Veterans of every service era since Vietnam have participated and been both appropriately compensated and empowered to further create art and interact with civilian society about their experiences. This is lifechanging programming that amplifies veteran expression in NYC and beyond, and that has played a meaningful role in cultivating health and empowerment and community for veteran artists and performers. Many other organizations and individuals have likewise been part of cultivating veteran-civilian dialogue and community through art—Lucid Body, Warrior Writers, Bedlam, Military Resilience Project, Service Together, Society of Artistic Veterans, Veteran Artist Program, and Arts in the Armed Forces, just to name a few.

The NYC Veterans Alliance has invited Commissioner Sutton and Bryan Doerries to hear directly from veteran artists and others who have been involved in productions and organizations in the NYC Metro area that are actively fostering dialogue between veterans and civilians through artistic expression. We’ll share our experiences, as well as seek answers to the following questions:

We’ve scheduled this meeting on Wednesday, March 15th, 5-7 PM. If you are a stakeholder in this community with experiences to share and/or concerns to discuss, please attend if you can.