On June 1, Congressman Dan Donovan (NY-11) joined NYC Veterans Alliance, Vietnam Veterans of America Chapter 72, and Iraq and Afghanistan Veterans of America in opposition to further closures and reductions at the Brooklyn VA Hospital. As with last year's plan to close outpatient surgeries at the Brooklyn VA, the plan to close the ear, nose, and throat (ENT) clinic this month comes as yet another reduction of services for veterans who rely on this crucial facility. View the full video here:

Brooklyn is home to more than 41,000 veterans, and the Brooklyn VA hospital is one of three VA hospitals serving more than 220,000 veterans living across the five boroughs. Yet in recent years, we have seen numerous moves to reduce services for veterans in Brooklyn. Today, it is the planned closure of the ear, nose, and throat (ENT) clinic at the Brooklyn VA. Last year, it was the proposed closure of outpatient surgeries--which, thanks to the advocates in this room and the leadership of Congressman Dan Donovan--did not come to pass.

But two years ago, the VA did succeed in closing a key outpatient clinic in downtown Brooklyn. Despite the large veteran population in this area, and despite the fact that the VA itself relied on the Brooklyn VA as a backup site for patients who couldn't access the Manhattan VA because of severe damage from Hurricane Sandy--there seems to be a steady march towards reduction and closure in Brooklyn. This cannot go unanswered.

The Brooklyn VA should be a beacon of quality healthcare and services for veterans in need--from our distinguished older veterans to younger veterans just now returning home from wars that are still underway across the globe.

If the VA claims that fewer patients are coming in for care--it is not for a lack of veterans living right in this area who urgently need quality healthcare. Veterans, especially those who have served in our post-9/11 conflicts, are suffering from conditions related to breathing in toxic smoke from burn pits, and must have full access to ENT examinations. Not to mention the need to diagnose and treat conditions like snoring disorders, vertigo, hearing loss, and tinnitus--the list of ENT conditions is far too long. If the Brooklyn VA's ENT clinic has too few patients--it is not for a lack of need among veterans.

It is incumbent on the VA to ensure it is providing high quality healthcare--and messaging to veterans that the Brooklyn VA is open for business and ready to put veterans first as patients who have earned it.

Let us be clear. Closure of any VA service in Brooklyn or elsewhere in New York City marks a failure of the VA. We stand firm in opposition to reduction of services at any VA in the city. The Brooklyn ENT clinic must stay open.

Statement by Iraq and Afghanistan Veterans of America:

IAVA stands with NYC Veterans Alliance and VVA Chapter 72. This is no time to reduce healthcare access for Brooklyn and Staten Island veterans, and we greatly appreciate Congressman Donovan's work in ensuring outpatient surgeries remain available after the plan circulated last year for closure of those services. We believe further reductions need to be addressed as strongly, and that VA Choice must work effectively before it is actually a reasonable choice for veterans to make--not to be forced into. IAVA remains against any reduction in VA care in Brooklyn or elsewhere in NYC, be it large or small.

Rep. Donovan has sent the following letter to Acting Secretary of the U.S. Department of Veterans Affairs, Peter O'Rourke:

I write to express my serious concerns regarding news that the Brooklyn VA Medical Center (VAMC) has closed its ear, nose, and throat (ENT) Clinic. Veterans from my district who rely on the department will now be forced to travel to the Manhattan or Bronx VAMC, which would cause hardships for many veterans, particularly the elderly and disabled, who will face long and difficult commutes to get to these locations. Any decision that might limit or deny health care to thousands of veterans throughout the New York City area should be re-considered, and I urge you to reverse this decision.

Reports have stated that the termination of the Brooklyn ENT Clinic was caused by the VA’s lack of ability to fill staffing vacancies. No matter the reason, it is unacceptable that the unit will be closed, and it’s the VA’s responsibility to properly staff and maintain services for veterans in need. I respectfully ask what plans the VA has to address these staffing vacancies and what can be done to prevent issues like this in the future? Further, what immediate steps can be taken to swiftly reopen the Brooklyn VAMC ENT Clinic?

The Brooklyn VAMC allows veterans from Staten Island and Brooklyn to easily access the quality care and medical services they earned through their heroic service. These brave men and women risked life and limb to defend and protect our freedoms, and they deserve to know that they will be taken care of.

Thank you for your time on this important matter.

Thank you to Rep. Donovan, VVA Chapter 72, IAVA, and all who joined us. Thanks also to the Knights of Columbus for offering space for this important event. 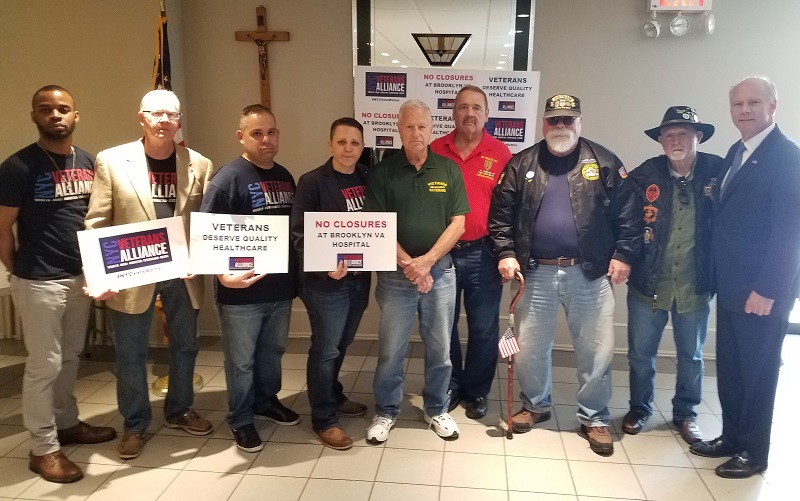