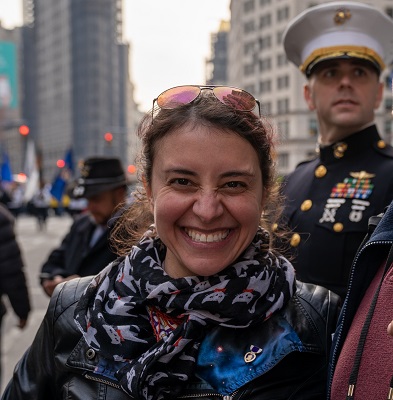 Last month we commemorated the 100th anniversary of Veterans Day here in New York City with the largest Veterans Day parade in the US, thanks to combined efforts of the United War Veterans Council, city support, and hundreds of volunteers with months of planning. On this centennial, tens of thousands of Veterans and supporters from around the US and around the world marched up a mile stretch of the iconic NYC 5th Avenue in force. Since exiting the Army, I worked on the logistics and planning side of this annually monstrous event, only skipping volunteering this year as I recovered from a significant surgery following complications from my combat injury--after many years of chronic complications, my leg was amputated, and I now have a prosthetic leg. This year, for the first time, I watched the NYC Veterans Day Parade from the VIP grandstand.

I stood next to a good friend: a Marine Corps Veteran and now Reservist I’d connected to volunteer for the parade a few years ago, in his uniform after laying a wreath at the opening ceremony. He stood next to another good friend sporting a ballcap proclaiming his Vietnam service with the 101st Airborne. After a city-sponsored event in the morning, I wore my Purple Heart lapel pin and, since it was lovely weather for November in the northeast, a skirt that fell above my prosthetic leg.

I realize I don’t look exactly like the average civilian perception of Veterans--white, male, 6’2”, all-American apple pie, and over the years I’ve become well-acquainted with what it feels like to have my service questioned. It can be innocuous with a surprised, “Oh, you served? Cool,” but it can also be a more biting, “Yeah, show me your ID” or worse. No matter what, it is a bit insulting to be on the receiving end of, “You don’t look like a Veteran."

I’ve been glad to see new campaigns, like the U.S. Department of Veterans’ Affairs #IAmNotInvisible to bring awareness to the 2 million women Veterans in the United States. I’ve also been glad to take part in a newly launched campaign by Iraq and Afghanistan Veterans of America (IAVA), #IAmIAVA, which reinforces that Veterans are of all races, genders, identities, and backgrounds. Kudos to these campaigns trying to change how civilians think of Veterans. But here’s the kicker: it’s not just civilians.

As I watched the Veterans Day Parade stream by the VIP bleachers, I leaned on the barricade and ran my mouth with friends who were marching or volunteering. My Marine friend standing next to me yelled “Happy birthday” to every flash of eagle, globe, and anchor, while my Army Vietnam Veteran friend gave a “welcome home” to every generation with particular regard for Vietnam-era groups. Lots of Veterans ran over to shake hands with both of them and return well wishes, enjoying the shared feeling of community and support.

But a pattern developed as the day wore on: unless I knew the person, those running over would shake the Vietnam Veteran’s hand, then the Marine Corps officer, then the bearded volunteer with whom I was talking (wearing his Army Air Cav Stetson but no logos). Then sometimes they'd look me in the eyes, sometimes ignore me altogether before wordlessly turning to jog back to their spot. Two Vietnam Veterans paused, “Wait, is that your Purple Heart?” and offered a heartfelt Happy Veterans Day, but they were the sole exceptions.

When the IAVA contingent marched past with a 10-foot image of me as part of their #IAmIAVA campaign on the side of their float, I watched my Veteran cohort come over to shake the hands of the three tall, maleVeterans, skipping me even with my face peering from over their shoulder and staring them down as they turned to rejoin the group. None noticed.

It's a small lapel pin, I get it. I know on a usual day I don’t look like I served almost ten years in the Army to be retired as a Sergeant First Class, and I prefer it that way. But Veterans Day isn’t a usual day; it’s a day when we make new friends at the crowded after-parties or along the parade route, where we celebrate and feel supported. Yet the assumption that day was the gentlemen to my right and left were Veterans and I was not. Not even with my face plastered several feet tall among 100 Servicemembers from my own generation. Not even at the VIP grandstand while resting a chunk of metal instead of a leg on the barricade.

I laugh it off, I get back to work, but the feeling of having my service and my service-connected injury overlooked by my own brothers and even sisters-in-arms is a sting that’s hard to shake off. The reality is that there is  a high - and increasing - suicide rate among my fellow #ladyvets. There is a high suicide rate among Veterans of color, LGBTQIA+ Veterans, and among Guard and Reserve Veterans. I can’t help but wonder if this feeling of disconnectedness, of not being seen by other Veterans plays a role in these terrible statistics. Veterans might seek support from civilians, but we need support from our own. If we aren't seeing each other, that's a problem. These diversity campaigns are so important, but how can we expect the broader community perception to change when we share the same clouded vision?

We need to do better for each other before we can ask it of anyone else.