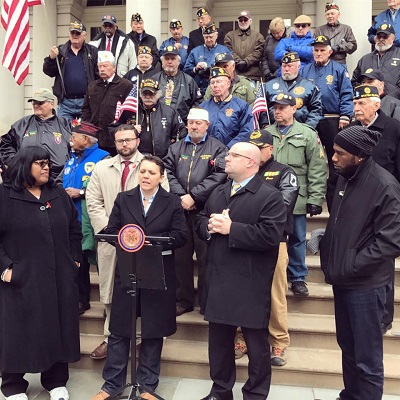 On Thursday, December 8th, the NYC Veterans Alliance presented testimony at a joint hearing of the NYC Council Committee on Veterans and the Committee on Finance regarding Introduction 1304, which would amend the Alternative Tax Exemption for veterans to include exemption of NYC school taxes for eligible veterans. Below is the testimony of Kristen Rouse:

My name is Kristen Rouse. I am a veteran of the United States Army, I served three tours of duty with the Army in Afghanistan, and I live in Brooklyn. I am testifying on behalf of the more than 220 dues-paying members of the NYC Veterans Alliance.

Affordable housing is a top concern for all New Yorkers, but when we discuss veteran housing in particular—we’re often told to stand in line. Yet going back to the veterans who came home from World War II, veteran reintegration and housing have been intimately linked. Veterans returning home to New York City didn’t just have the G.I. Bill assurances of an education and guaranteed home loan—they also had more than 11,000 apartments in Peter Cooper Village built specifically for veterans and their families to give them the baseline stability they needed to get back to work and build this city’s economy and livelihood as what we now call the Greatest Generation. Yet since that tremendous investment for veterans—and its even greater payoff for New York City and America—our city just hasn’t made the same investment in its veterans.

I felt this very personally in my own New York experience—I left an expensive Brooklyn apartment that I’d leased after coming home from my first combat tour, and that I sublet during my second combat tour—and when I came home from my third combat tour in Afghanistan—my only choice was to find another market-rate apartment that was even more expensive than what I was paying before. And when I looked into the feasibility of buying an apartment in my neighborhood, I realized that the VA Home Loan promised to me is functionally unusable in this city. We can call this the price of living in New York—but it also showed me very personally that the city I call home had no interest in welcoming me home from war and getting me back to work to keep this city great. But we can change that. All of us in this room can change that.

Housing is our most basic need in this city. We’ve finally recognized this enough to create significant solutions for the shameful scourge of veteran homelessness, and our city has made commendable efforts to prioritize homeless veterans for housing. But we can’t stop with serving only the most vulnerable of our veterans. The Greatest Generation wouldn’t have reached their pinnacle of success without the investment of a grateful nation and a grateful city. We need to invest in every veteran who spent years of their life in military service.

Today’s hearing is only about one seemly small change in the overall scheme of veterans housing, but the outcome of this bill will be a crucial statement on whether our city will begin to truly prioritize housing stability for all veterans—or whether it will maintain the status quo of leaving us on our own to fight our way through life in this city, one bootstrap at a time.

Introduction 1304 proposes to bring needed tax relief to veteran homeowners in NYC by adopting the NYS Real Property Tax Law 458-A, passed in 2013, which includes school tax as part of the Alternative Veterans Exemption for property owners—which is at last possible thanks to recent action in Albany.

NYS law, and corresponding NYC tax policy, has provided tax exemptions for veteran homeowners going back many years, but veterans have never been exempt from paying NYC’s school tax, which has increased more than 60% since 2003. Our aging veteran homeowners live on fixed incomes, and these tax increases have unduly strained their quality of life.

Over the summer, my organization held a stakeholder meeting on this important issue, and brought in experts from the NYC Department of Finance as well as veteran homeowners to talk about this situation. In our meeting, we heard from Vietnam veterans in particular—who paid their fair share of taxes during their working and childrearing years—that the increasing burden of school tax is jeopardizing their financial security and making them feel “priced out” of the city they’ve always called home.

We realize this city has a budget to balance. But we ask all of you to remember that this city’s budget has been balanced for decades on the backs of the veterans of our wars in Korea, Vietnam, Panama, Somalia, the Persian Gulf, Bosnia—and more recently Iraq and Afghanistan. The tax break that this law would provide is only a tiny fraction of what our city should have invested in its veterans a lifetime ago. And this would only be one important step in the right direction—because we also need policies that make living in and owning homes in NYC stable—and possible—for veterans of every generation.

We strongly urge you to pass this bill without delay. And we strongly urge you to get to work on making smart investments in all of our veterans—because investing in veterans is not only the right thing to do—investing in us will pay tremendous dividends. On behalf of the NYC Veterans Alliance, I thank you for the opportunity to testify today. Pending your questions, this concludes my testimony.