Last year, the city allocated funding for the Mayor’s Office of Veterans Affairs (MOVA) and City Council discretionary funds, in the form of contracts with organizations serving veterans, with a total of just over $700,000[1] in NYC tax dollars allocated for veterans affairs and services in Fiscal Year 2015. This initiative ranked fourth in receiving the strongest support of the sixteen listed in the survey. A total of 91.0% of respondents indicated that they view this as either essential or very important. 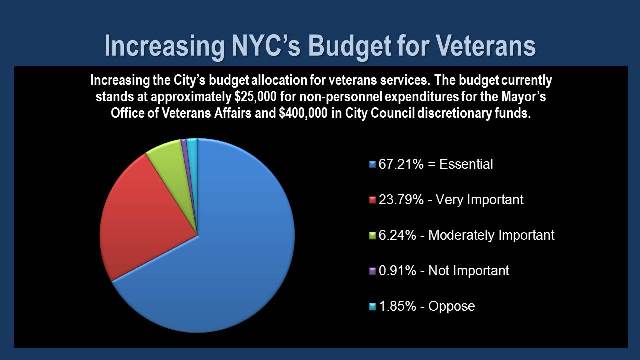 Mayor’s Office of Veterans Affairs (MOVA): The total budget for MOVA was $614,274, with $311,780[2] being funded by a New York State grant for a dedicated NYC (county) veterans affairs agency. A total of $592,274 went toward salaries and benefits for the Commissioner and five full-time staff members.[3] Another $18,822 went to “fixed miscellaneous charges” listed as “payments to military and other.”[4] The remaining $3,178 went toward supplies, materials, data processing supplies, books, office services, and travel reimbursements.

How Much Per Veteran? City agencies provide services to veterans that are not named specifically in the budget, although no cost breakdown of citywide veterans programs has been made public. It is, however, accurate to state that the de Blasio administration allocated $302,494 in city tax-levy (CTL) funds in FY 2015 for the administration of veterans affairs, which amounts to about $1.30 per veteran. The City Council allocated $400,000 in FY 2015. Taken together, NYC government has allocated about $3 per veteran annually.

$150 Million? Commissioner Sutton stated in a June 2015 City Council testimony that NYC government spends a total of $150 million annually on veterans services “across more than a dozen agencies for programs and services that benefit veterans and their families,” $57 million of which is for “veteran-targeted housing programs through NYCHA, HPD, and DHS” and $1 million of which is spent by SBS on “workforce employment mentoring to entrepreneurial networking.” It appears that this $57 million refers to HUD-VASH vouchers that are funded by federal dollars and not city tax-levy (CTL) funds; no other housing program for veterans aside from HUD-VASH is known to have significant costs such as this.[11] More information on SBS services for veterans is detailed on pages 58-61 of this report. No further public release has been made of detailed policy initiatives, budgets, work groups, or other specifics related to Commissioner Sutton’s statement.

2016 Budget Announcement. On June 22, 2015, Mayor de Blasio and Speaker Mark-Viverito announced that $1.5 million in additional funding will be allocated for new staffing and resources for ending veteran homelessness, as well as $335,000 in new funding for a team of Veterans Service Officers to be made available across the five boroughs.[12] At the time of the release of this report, no detailed FY 2016 budget documents were available for review—and it remains to be seen whether the $1.5 million for veteran homelessness is allocated from federal or city tax-levy (CTL) funds. It must also be noted that this announcement comes after persistent pressure between April and June of 2015 by the NYC Veterans Alliance, Iraq and Afghanistan Veterans of America, and other outspoken advocates to increase city funding for veterans affairs and to restore the three veterans benefits counselors slashed from the FY 2015 budget (see above). This announcement represents a step forward, but the entirety of this report should make clear that far more resources and coordination of existing resources are needed for NYC government to catch up to the per-capita funding level for veterans that other cities are currently providing.

Local-Level Funding for Veterans Affairs. Other large cities in the U.S. provide a greater amount of local-level funding for veterans affairs and services per capita than NYC:

Recommendations. MOVA has an important coordinating role with city agencies that serve veterans, but it is extremely limited in the amount of funding and direct programming it manages—particularly in comparison with other cities that provide local-level funding for veterans services. We therefore make the following recommendations:

[6] See pages 58-61 of this report for information on contracting goals for veteran-owned businesses.

[7] See pages 16-18 of this report for information on discretionary funds.