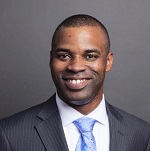 Staff Sergeant (Ret.) James Fitzgerald is a nine-year veteran of the United States Army serving as an Infantryman with deployments to Iraq and Afghanistan. He received the Purple Heart and in 2014 was medically retired due to injuries sustained during combat in Afghanistan while serving with the 101st Airborne Division. Originally from Tennessee, he moved to NYC following his military discharge, and he resides in Bushwick, Brooklyn. He interned at the White House with First Lady Michelle Obama on Joining Forces, an initiative connecting service members, veterans, and their families with public and private sector resources in education, employment, and wellness—sparking his fierce advocacy for veteran and military families on a local, state, and national level. He also serves his community on Brooklyn Community Board #4 and sits on the Veterans Committee. He has spoken on his military service and advocacy in major media outlets, including Time, Fox News, PBS, Military Times, and NY1.