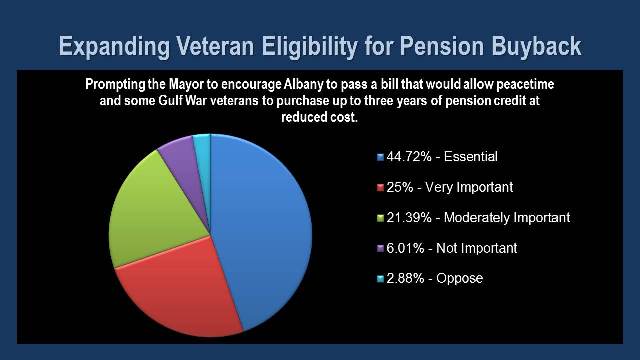 November 2014 Veto. Last year, the NY State Assembly and Senate passed legislation that would extend veteran eligibility for purchasing up to three years of pension credit at a reduced cost. The intent of this legislation was to update eligibility requirements for combat veterans beyond the eras and geographic localities of existing law, as well as extending it to some non-combat veterans in parallel with existing eligibility for veterans who served during the Vietnam era but not in direct combat. Despite legislation passing both the NY State Assembly and Senate, Mayor de Blasio lobbied Governor Cuomo to veto it, citing concerns that it was too great a financial burden on the city. Governor Cuomo vetoed the bill last November.[1]

Statement of Support by Mayor de Blasio. In a press conference during Fleet Week and in anticipation of Memorial Day, the Mayor announced a reversal on his position. He stated that he would support current NY State legislation entitled the Veterans Equality Act,[2] which would extend eligibility for Afghanistan veterans.

Statement of Opposition by Mayor de Blasio. On June 19, Mayor de Blasio again changed his position on the Veterans Equality Act, issuing a Memorandum in Opposition to it,[3] citing financial concerns. He then issued a Memorandum in Support on June 22 for an alternative bill that would provide eligibility only for Afghanistan veterans at the exclusion of other combat veterans who served in locations that are ineligible under current law.[4]

Current NY State Legislation. As of the publication of this report, NY State Senate bill S2124[7] was unanimously passed by the NY State Senate. The corresponding NY State Assembly bill A8174-A[8] passed with only one “no” vote on June 26. Both bills are “All Veterans” versions, and, if signed into law, would update existing legislation by removing a large volume of restrictive wording that describes dates of military conflicts and geographic areas that would then need to be continuously updated to ensure all combat veterans would be eligible. The bill also extends eligibility to include peacetime and stateside veterans, which is consistent with prior inclusion of all veterans during designated pre-1975 conflict periods, regardless of the geographic location of their service. In effect, all honorably discharged veterans with at least five years in civil service would be eligible to purchase up to three years of pension credit. The law would then need no further amendment or update to include future veterans.