We Did It! Preserving Lifesaving PFC Joseph P. Dwyer Program for Veterans in New York State! 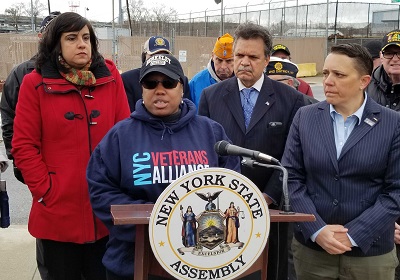 3/31/19 UPDATE: Thanks to you taking action these last few days, today the New York State legislature put forward an appropriations bill that FULLY FUNDS the PFC Joseph P. Dwyer Veteran Services Peer-to-Peer program, avoiding deep cuts that seemed imminent only hours ago. This means veterans at risk for suicide in counties across New York State will continue to benefit from the support of peer mentors and their community. We further urge state legislators to continue investing in and expanding this young, successful program in the months and years to come.

Special thanks to each and every one of our community members who reached out to Governor Cuomo and NYS legislators--and thanks also to backup from our community partners at Iraq and Afghanistan Veterans of America who had our backs on this! We are also grateful for the legislators and advocates across the state who spoke up to protect this vital program, including NYC-based Assembly Members Felix Ortiz and Nicole Malliotakis.

On March 31, the New York State Senate and Assembly moved forward a final appropriations bill restoring the full $3.7 million for the PFC Dwyer Program, which had been cut by more than $2 million in the Executive Budget.

“This is a relief. It would have been unconscionable for New York State to cut this program that has been a lifeline for so many veterans across the state. We urge our legislators to further invest in and expand the PFC Dwyer program in the months and years ahead. It should never again be on the chopping block,” said U.S. Army Veteran and Founding Director Kristen Rouse.

Launched in 2012 as a pilot partnership between our Suffolk County United Veterans program and the Suffolk County Veterans Service Agency, the Dwyer Project takes a confidential, one-on-one, peer-to-peer approach that has rapidly captured the attention and support of both veterans and mental health professionals statewide and across the nation. Named to honor the memory of an Iraq war veteran from Mount Sinai, NY, the PFC Joseph P. Dwyer Veteran Services Peer-to-Peer program serves veterans facing the challenges of Post-Traumatic Stress Disorder (PTSD) and Traumatic Brain Injury (TBI).

According to the latest statistics published by the U.S. Department of Veterans’ Affairs, an average of 20 current or former service members die each day in the U.S.—a rate of 30.1 per 100,000. This is more than twice the rate of our civilian counterparts. In New York State, the rate of veteran suicides is 19.0 per 100,000—lower than the national average, but still nearly double the rate of New York’s general population, which is 10.4 per 100,000. This data makes clear that veteran suicide continues to be a crisis in New York as well as the U.S. as a whole.

Peer support programs such as the Dwyer Program are essential to engaging veterans who struggle with high risk factors such as PTSD and TBI by finding common ground with fellow veterans to bring greater self-awareness and understanding of their conditions, as well as encouraging them along the path toward coping, healing, and moving forward positively in their lives. New York State and the nation must continue investing in these lifesaving programs to turn the tide of veteran suicide.