UPDATE 1: Rally with us on Valentine's Day!

UPDATE 2: The Mayor heard you loud and clear! We have word that the Mayor is revising his budget proposal to restore the DVS staffing and funding to the same levels as the 2017 budget. We'll update our website and social media with details as we have them.

Yesterday, Mayor de Blasio released his administration’s preliminary budget for Fiscal Year 2018 (which begins on July 1st). This is the first step in the city’s process of putting resources behind its priorities. Unfortunately we see a strong statement here about NYC’s veterans, military members, and their families—less funding during a year when the city has had very strong tax revenues. Simply put, we just aren’t a priority in Mayor de Blasio’s budget. 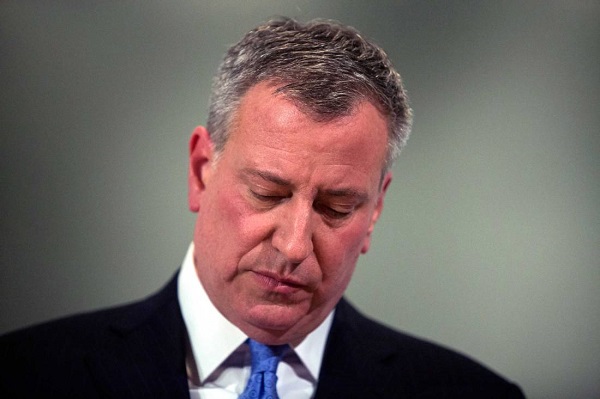 Back in 2015, the budget for veterans was just $600,000—and on Memorial Day that year, de Blasio’s administration insisted that there was no need for anything larger—that the small office and budget “is as it should be.” Our community saw things differently. We called on our city government to do more for veterans—and we got results. But this is only the beginning.

Last year we saw a huge effort to establish the new NYC Department of Veterans’ Services (DVS) with a budget of $2.9 million, and the work of Commissioner Sutton and her new team has been impressive and gives us hope. But we simply cannot shortchange veterans next year. Especially when our mayor boasts of a new budget with the "highest reserves we've ever had."

Here are some key details of what Mayor de Blasio has proposed for veterans in his 2018 budget:

The Mayor proposes to cut $317,000 from the amount DVS received last year. Granted, there are one-time or short-term costs for supplies and equipment for the new agency to establish itself, which we see in many cut budget lines. But once a new agency is established, it shouldn’t be trimming back—it should be expanding with new capabilities and programs and outreach.

For example, we hope to see more DVS staff providing outreach across the city, yet funds for travel reimbursements have been cut by $6,000. We want to see more printed publications for our huge population of veterans who don’t regularly access the internet, yet funds for printing and general supplies have been slashed by more than $155,000. Our community of veterans, military members, and their families are just beginning to see that there’s a new agency in place to support them—and the new DVS is just in its first phases of showing us what they can do. We can’t start going back to the old “it is as it should be” days of limited funding for veterans--we need more, not less.

The Mayor proposes to cut one key homelessness prevention staff position created in last year's budget. This leaves DVS with 34 personnel rather than the 35 planned for the new agency; 8 remaining staff members are dedicated to homelessness prevention, in addition to 4 staff members at the Department of Homeless Services who interact with homeless veterans on streets and in shelters.

Affordable housing is a top priority of our membership, and it is a far broader issue spanning beyond the crisis of veteran homelessness. We need more smart staff—not less—working on solutions for veterans to afford housing. A core promise that our nation makes to veterans is to enable them to purchase a home—yet this promise is far too unattainable for far too many veterans who can barely afford to pay rent in the five boroughs. Getting veterans off the streets and out of homeless shelters isn’t nearly enough to fulfill our nation’s and our city's obligation to veterans. We cannot afford to lose staffing in a brand new agency, especially related to housing.

Even though the new budget proposal reports that the city’s assessed property tax value (including existing exemptions for veterans and elderly) went up by $17.6 billion (no, that’s not a typo), the Mayor could not find the funding to provide veteran homeowners with long overdue relief from school taxes, which have increased more than 60% since 2003.

The estimated cost of this exemption would be $39.6 million—which is less, for example, than what the city brings in annually from cigarette taxes. Our city can and must provide this long-overdue exemption to veteran homeowners. Budgeting for the Veterans Alternative Tax Exemption is the least that Mayor de Blasio can do, and just one step toward meeting our city’s obligation to ensure veterans can afford homes in the city they call home.

We made a difference in 2015--and it's time to keep those gains from being rolled back. Let Mayor de Blasio know he needs to support veterans in the 2018 budget by calling 311 or sending him an online message (click HERE).

UPDATE: Rally with us on Valentine's Day!