The City Council Veterans Committee has introduced a bill that would elevate the current Mayor’s Office of Veterans Affairs (MOVA) to an independent agency that would centralize oversight and management of veterans affairs in NYC and be accountable to both the Mayor and City Council. MOVA currently is only accountable to the Mayor. As of the release of this report, this bill is pending in committee. A total of 84.37% of respondents indicated this initiative was either essential or very important to them. 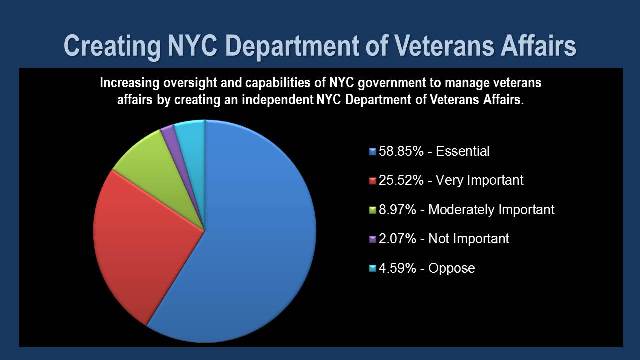 Current Role of MOVA. The NYC Mayor’s Office of Veterans Affairs (MOVA) currently states the following information on its website:[1]

The Mayor's Office of Veterans' Affairs (MOVA) was established by local law 53 in 1987.  MOVA advises the Mayor on issues and initiatives impacting the veteran and military community.  MOVA works with the U.S. Department of Veterans Affairs (VA), the New York State Division of Veterans Affairs (NYSDVA), City Agencies, veteran's organizations and other stakeholders to offer services to veterans, their dependents and survivors; while encouraging innovative partnerships to ensure creative problem solving.

This web site contains a wealth of information and is designed specifically to accommodate the needs of the veteran and military community; whether you are currently serving or a veteran, MOVA can be a great resource either through this website or by calling our office at 212-442-4171 or going to 311 Online.  Our Office is located at 346 Broadway, 8 West.  (Entrance for visitors is on 108 Leonard Street)

The  office:  1.  shall  have  such  powers  as provided by the director of the state veterans' service agency and shall  have  the  duty  to  inform military and naval authorities of the United  States and assist members of the armed  forces  and  veterans,  who  are  residents  of this state, and their families, in relation to

a)    matters  pertaining  to  educational  training  and   retraining   services   and facilities,

b)    health,   medical  and  rehabilitation  service  and  facilities,

c)    provisions  of  federal,  state  and  local  laws  and  regulations  affording  special  rights and privileges to members of the  armed forces  and  veterans  and  their  families,

e)    other matters of similar, related or appropriate nature. The office also shall perform such other  duties  as may  be  assigned  by  the  state  director of the division of veterans'  affairs;

2. shall utilize, so  far  as  possible,  the  services,  commissions, boards, bureaus, institutions and other agencies of the state and of the  political  subdivisions thereof and all such officers and agencies shall  cooperate with and extend such services and facilities to the office  as  it may require.

Current Limitations of MOVA. MOVA currently has a Commissioner and five staff members who operated last year on a budget of $614,274, with $311,780 being funded by a New York State grant for a dedicated NYC (county) veterans affairs agency.[3] Given the duties specified in the City Charter for MOVA, in addition to the current scope of veterans’ needs and the resource landscape for NYC veterans, we observe that MOVA currently has the following limitations:

Currently, Section 14 of the New York City Charter establishes an Office of Veterans Affairs within the mayor’s office. This bill would establish a separate Department of Veterans Affairs (the “Department”), headed by a Commissioner of Veterans Affairs. The bill would provide the Department with the responsibility to cooperate with federal, state, and local agencies and to inform and assist members of the armed forces and veterans, and their families in matters relating to: educational training and retraining services and facilities; health, medical, and rehabilitation services and facilities; provisions of federal, state, and local laws and regulations giving special rights and privileges to members of the armed forces, veterans, and their families; employment and re-employment services; and other appropriate matters.

Additionally, this bill amends the New York City Administrative Code to require the Department to publish information on its website concerning resources intended to assist veterans in obtaining employment, and to consult with city agencies to identify job postings for inclusion on the Federal veterans’ job bank. Finally, the bill requires each city agency to designate an employee to act as a liaison with veterans within the agency, and the Department to provide periodic training to the veterans’ liaisons, as well as to post on its website the names of the liaisons at each city agency.

Benefits of Creating a Department of Veterans Affairs for NYC. If this bill were to pass, it would have the following benefits that are otherwise not possible under the existing MOVA charter:

Respondent Comments. Comments from respondents on the topic of creating a Department of Veterans Affairs include:

Recommendations. MOVA’s current level of staffing and resourcing is far too limited to manage veterans affairs for the largest city and the largest city government in the country, and it is also insufficient for MOVA to fulfill the duties currently mandated for it by the City Charter. MOVA also has too limited authority to fulfill its chartered role and properly oversee programs, funding, and resources that serve NYC’s veterans, service members, and their families. A separate Department of Veterans Affairs should be established and fully resourced to achieve the outcomes intended by the City Charter. We therefore make the following recommendations:

[3] See pages 26-30 of this report for information about MOVA’s budget and expenditures.

[4] See pages 16-18 of this report for information about City Council discretionary funds.