On Monday, March 6, the City Council’s Veterans Committee held their preliminary budget hearing on funding for the Department of Veterans Services. Commissioner Loree Sutton of the Department of Veterans’ Services testified before the Committee, as did Kristen Rouse, Founding Director of the NYC Veterans Alliance, and Barbara Johnson Stemler, Senior Manager of Access Programs at the Intrepid Sea, Air, and Space Museum. 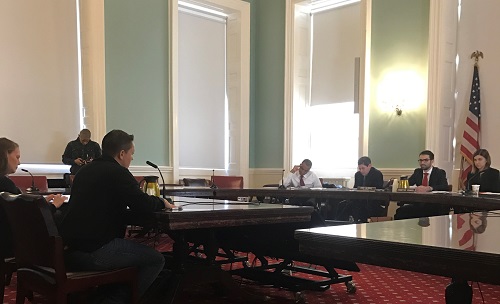 Of note in Commissioner Sutton’s testimony:

Commissioner Sutton noted that DVS truly is a “start-up entity” and that part of the $3.6 million budget from Fiscal Year 2017 went toward start-up costs, which will not be needed for FY 2018. Commissioner Sutton is confident that upcoming budget talks will translate into a funding plan that will allow DVS to continue serving the veterans community.

DVS has led the nation in its response to veteran homelessness, connecting 1,600 homeless veterans with permanent, affordable housing in the past year. They’ve also decreased the time it takes to house a veteran, from 326 days in September 2015 to 162 days in September 2016. They are working to continue decreasing the time it takes to get a veteran from a shelter to permanent housing.

DVS aims to increase access to resources available to veterans by opening satellite offices with Community Outreach Specialists in each borough. They have now opened these satellite offices in the Bronx (at the Bronx County Courthouse), in Queens (at Queens Borough Hall) and at 2 locations in Staten Island. They are now working on setting up satellite offices in North Manhattan and in Brooklyn, with the hopes of having those up and running in the near future.

Commissioner Sutton confirmed that there are currently approximately 500 homeless veterans in the shelter system in NYC. The Mayor announced funding for 500 new units of housing for homeless veterans.  It isn’t clear yet when those units will be available, but we note that this is barely enough to house the number of veterans currently in shelters.

Commissioner Sutton specifically mentioned the NYC Veterans Alliance, noting that that our June 2015 Survey on NYC Veteran Policy Priorities was particularly beneficial to them.

DVS plans to submit a section to the Mayor’s Management Report this year.

In February 2015, the New York City Council passed a law requiring some city agencies to gather more robust data on veterans they are serving to better understand what services veterans are accessing. Commissioner Sutton stated that DVS is currently on a “data journey.” They are working with the Mayor’s Office of Operations to standardize the process of identifying veterans coming through each relevant city agency, in the hopes of creating a process to gather more and better data.

Chairman Eric Ulrich pressed his idea that DVS to have a chief contracting officer, so that community based organizations here in the City can directly receive funds from DVS. Currently, funding goes through 5 different agencies, and he would like to see DVS become a contracting agency so that groups can be funded directly through DVS and get their funds in a reasonable amount of time. Some groups have been waiting 2 fiscal years to receive their funds, including IAVA, which is still waiting for execution of a contract from FY 2016. Kristen Rouse also advocated for DVS to become a contracting agency in her testimony.

Chairman Ulrich noted that he would like to see the Mayor’s Office spearhead a public-private partnership between the people in the city who are generous with veteran’s causes and the City of New York to support services for veterans. He would like to see a quasi-governmental non-profit that the City and donors in the private sector can contribute to, to be used to support outreach and initiatives.

During her testimony, Kristen Rouse applauded the great work DVS has done since its inception, and noted that many of our members have been impressed by the staff brought on board and the caliber of work they are doing. However, it was noted, there is more work to be done. The Alliance regularly refers veterans and family members to DVS for help, and has in some cases received reports back that DVS has been unable to help them. DVS must further expand to provide more comprehensive help for veterans and their families. For this reason, Kristen urges that DVS’s budget must increase, not decrease, this fiscal year. The Mayor’s preliminary budget decreased funding to DVS by $318,000, and that is unacceptable. The Finance Department noted that the Mayor has agreed to restore funding for DVS to 2017 levels, and this should be made clear in the Executive Budget when it is released. Kristen noted for the record, “We’ll be glad to see it in writing.”

Barbara Johnson Stemler testified that DVS is a powerful advocate and centralizing force for veterans in the City. The Intrepid relies on DVS programs to provide trainings, and looks forward to working with DVS in the future.

The full testimony of the NYC Veterans Alliance can be viewed HERE.

Background, documents, and video of this hearing can be found HERE.