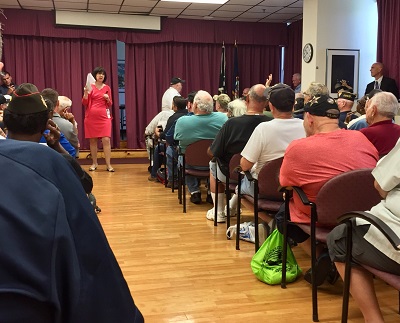 Following outcry by veterans who rely on the Brooklyn VA Hospital for care, Martina Parauda, Director of the VA NY Harbor Healthcare System (VANYHHS), took questions for more than two hours in a standing-room-only Town Hall at the Brooklyn VA on Wednesday, July 18.

Last month, a coalition of veterans organizations, led by President of Vietnam Veterans of America Chapter 72, Danny Friedman, sent a letter to Director Parauda and Joan McInerney, Director of the Veteran Integrated Services Network (VISN) overseeing NY and NJ, asking them to hold a town hall to answer questions from veterans about facilities closures and reductions in services at the Brooklyn VA Hospital in recent years. The letter is HERE.

VISN Director McInerney declined to attend, but Director Parauda agreed to host the July 18 Town Hall, to which political officials and members of the media were invited.

Questions regarding hospital-specific staffing levels, proposed and final budgets and the number of in-patient surgeries were answered from a Network perspective, and gave no info on the hospital itself.

Many of the veterans in attendance thought that the hospital director was evasive on several of the questions we posed to her, particularly about the ambulance diversion policy, a copy of which was leaked to us several weeks ago.  She referred to standard protocols that we were all aware of, but didn't mention that vascular surgery to include leg ischemia, gangrene, hip fracture, renal insufficiency, respiratory distress, acute coronary syndrome (metabolic), alcohol withdrawal and sepsis were all previously treated at BVA, but are now diverted to the Manhattan VA hospital.

She claimed that she never saw the ambulance diversion protocol, but it was signed by a Dr. high up in the staff, and he was there behind her at the town hall meeting in a lab coat!

The ambulance diversions are for many more situations than Martina described [cardiac and neurological emergencies].  This has resulted in a marked downturn of surgeries and was responsible for SUNY Downstate leaving after a 30+ year relationship with BVA.  The VA director admitted that the 25 "temporarily" closed surgical beds were not replaced since 2015, due to a downturn in surgeries.  If this protocol continues unchecked, the med surge beds will continue to decline at BVA.

The director's answer to the transparency issue was that she already has transparency.  That statement was disputed by the VSO Board, which meets quarterly with the director.  The VSO Board said that at the April meeting, nothing was said about the closure of the ENT clinic, nor the closure of the clinical laboratory.  The statement was also refuted by a representative from Congressman Donovan's office and State Senator Marty Golden.  Recently, Rep. Donovan proposed legislation that would provide VA transparency nationwide.

The Brooklyn Daily Eagle covered what was at times a heated conversation, particularly about the proposed closure of the hospital's ear, nose, and throat (ENT) clinic. Director Parauda denied the clinic was scheduled to be closed, despite a sign being posted on the clinic itself. Kristen Rouse pressed Director Parauda on the issue: 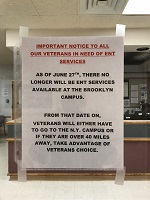 However, founding director of the NYC Veterans Alliance Kristen Rouse, reminded Parauda of the sign. “We appreciate that you responded to the public pressure and have kept the ENT clinic open two days a week instead of closing it as the sign on the clinic stated,” she said.

“I didn’t put up the sign in the clinic,” Parauda answered. “I’ve been upfront from the beginning. What has been misconstrued is my story.  When I learned there was a sign up at the ENT clinic saying it was closing I myself took down the sign because it wasn’t true.”

Nonetheless, State Senator Marty Golden, who was in attendance, later said, “If somebody in my office put up a sign that wasn’t authorized, then that person would not be working for me. That person will be fired.”
“I have no idea who put up the sign,” Parauda responded.

“If someone in my office put it up, then I am still responsible for it. You are responsible,” Golden said.

We appreciate Director Parauda's willingness to hear veterans and address our concerns, and we hope for open communication in the future. But it is clear that keeping services open and maintaining appropriate staffing at the Brooklyn VA Hospital requires continued vigilance by our community.