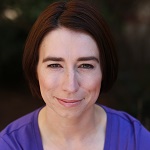 Adrienne Brammer is a 14-year U.S. Air Force veteran who worked as a broadcast journalist while stationed in Osan AB, South Korea; NAS Keflavik, Iceland; and Aviano AB, Italy. She also served as a combat videographer and deployed to FOB Marez, Iraq, and Kandahar AF, Afghanistan, while stationed at JB Charleston, South Carolina. Adrienne received her BFA in Acting from Marymount Manhattan College in 2016. She has performed onstage in Blueprint Specials at Intrepid Sea, Air & Space Museum, Our Trojan War at Brooklyn Academy of Music, and Bullet Catchers at Judson Memorial Church, and appeared in Shadow of Doubt: Green-eyed Monster on Investigation Discovery. She is an alumna of the Veterans Immersion Program at The Daily Show with Jon Stewart and is a Mission Continues Fellow, having worked in the marketing department at Lincoln Center for Performing Arts. She received the United War Veterans Council “Service to Veterans Award” in 2017. Adrienne is a founding member of Society of Artistic Veterans and once walked the catwalk with fellow women veterans to open New York Fashion Week. See her full portfolio at www.adriennebrammer.com