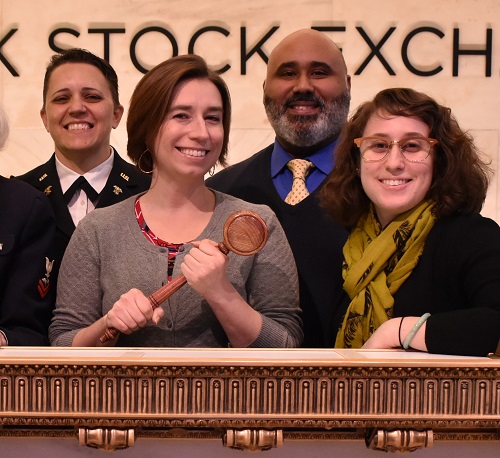 Adrienne Brammer, a 14-year veteran of the United States Air Force, is newly promoted into the role of Director of Community Outreach for the NYC Veterans Alliance. As the first staff member to join the newly formed NYC Veterans Alliance, Adrienne has served for nearly three years building and developing the regional community calendar and information hub, OurVeterans.NYC.

Last fall, Adrienne was honored for her innovative, steadfast service to NYC veterans and families with the 2017 "Service to Veterans" award by the United War Veterans Council, presented at the New York Stock Exchange. Building upon her tremendous service and dedication, Adrienne is now taking on further programmatic development of the Alliance's digital platforms as well as building and strengthening community partnerships more broadly across the NYC veterans community as the Director of Community Outreach.

Adrienne has served on Air Force bases across the U.S., South Korea, Iceland, and Italy, as well as serving as combat videographer in Iraq and Afghanistan, often accompanying troops on convoys and foot patrols.

Following her Air Force service, Adrienne made the NYC area her home, earning a bachelor's degree in acting using the G.I. Bill at Marymount Manhattan College. She has been active in the NYC Metro veterans community while also working her way up as a paid actor. Her breakout television role was playing the lead in an episode of Shadow of Doubt that aired on Investigation Discovery in 2017. She has also performed on stage in last year's critically acclaimed Blueprint Specials at the Intrepid Sea, Air & Space Museum. She also co-authored and acted in Our Trojan War at the Brooklyn Academy of Music and Bullet Catchers at the Judson Memorial Church. This year she appeared in a named role on AMC's Dietland. Catch her this summer in Twelfth Night, a Public Works production of Shakespeare in the Park!