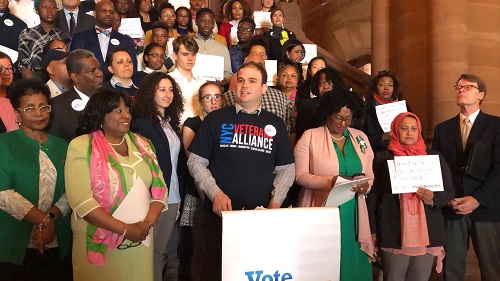 On Tuesday, May 8th, NYC Veterans Alliance joined with the NYC Campaign Finance Board and more than 100 advocates with the Vote Better NY Coalition to advocate for vital reforms to bring New York State's voting laws into the 21st century.

Five of our members served as team captains, leading meetings with NYS legislators and staff on a busy day in Albany. Our member Troy Olson spoke eloquently at our press conference in the Capitol's stairway:

Good morning – my name is Troy Olson. I’m a United States Army veteran and a Member of the NYC Veterans Alliance. Our members are here today as veterans, as New Yorkers, and as citizens of the United States of America.

As veterans, many of us have been deployed overseas in the cause of supporting and expanding democracy abroad. Today -- we're standing up for New Yorkers deployed abroad, to advocate a streamlined absentee ballot process for service-members, especially those stationed in forward areas. I've voted in every election of my adult lifetime, except one -- a municipal election when I was deployed overseas.

As part of our military service, we took an oath to support and defend the Constitution of the United States of America. Our Constitution has been amended over our history to include important voting rights amendments, five of them actually, to ensure that voter discrimination was legally dead in this land and grant all Americans equal access to the ballot. It took grassroots movements to get there each time, and you know what – we still have much work to do. We are working to create a more perfect union. As long as there are any barriers to voting, any difficulties whatsoever, we're still not there.

New York has one of the lowest voter turnout rates of any state in these United States. Voter turnout in New York City last year was 14% for the primary, 24% in the general. New York shouldn’t fall behind like this—we should be leading the
nation. Our elected officials must take action to change this.

We call on New York to join 33 other U.S. states who offer early voting without question or excuse, enabling New Yorkers—regardless of their long commutes or their responsibilities as parents, caregivers, workers, and active individuals—to
still find time to cast their vote.

We call on New York to ensure our votes have the full protections of the historic 1965 Voting Rights Act. No part of New York should ever again see mass purges of voter rolls like we saw in Brooklyn last year.

For many of us, our military service may be over, but the call to serve never leaves. I don't know about you -- but I think it’s time to fight for, support, and expand democracy here in the United States, and that fight begins here with early voting, streamlining voter registration, and protecting voting rights. 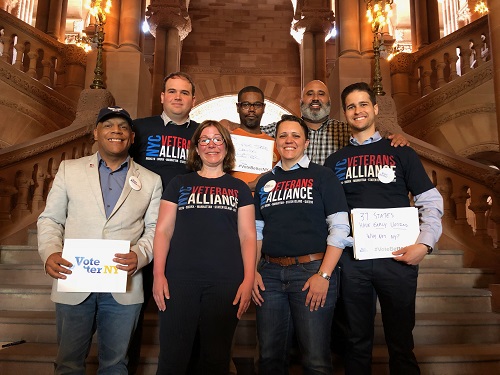 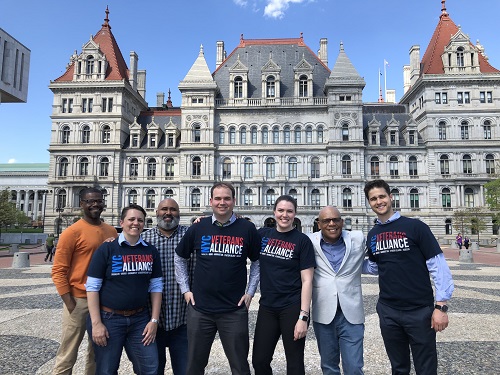