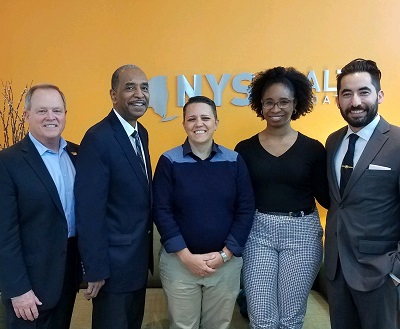 Last week, universal access to Veterans Treatment Courts across New York State was signed into law. We're proud to have been part of this tremendous push by the New York State Health Foundation, and we thank NYS Senator Brad Hoylman for championing this legislation.

First implemented in Buffalo, NY, in 2008, by Judge Robert Russell, Veterans Treatment Courts seek to connect veterans in the criminal justice system as a result of untreated mental health conditions with treatment, benefits, and support to get them back on the right track. Under this new law, qualifying veterans in every county in the state will be able to have their cases diverted from traditional criminal prosecution into the more specialized treatment path of a Veterans Treatment Court.

NYC Veterans Alliance has proudly endorsed this bill in the last two legislative cycles, contributing toward it finally becoming law. Both of these endorsements have included words from one of our founding members, Elma Sanchez, who served in the New York Army National Guard:

When I returned to New York from Afghanistan, I learned how important VTCs are for veterans. One evening, I got a call from a young sergeant asking for help because he had gotten a DUI. He was afraid that he would get discharged, ending his military career. He suffered mentally as a result of his war trauma. Fortunately, we got him enrolled in VA Substance Abuse Rehabilitation, and the VA helped shorten his sentence. However, not all stories end on a hopeful note. Another soldier I knew personally, lost his security clearance after his second DUI, which was necessary for his military job. He knew that his military career was over and did not know where to turn for help. Sadly he became one of the 20 veterans a day that take their own lives. We still mourn the life of this soldier who could have benefited immensely from the approach provided by VTCs.

We believe Veterans Treatment Courts can literally save lives, and we applaud the work of all those who contributed toward expanding access to these essential services across New York State.

Read more about our past advocacy to expand access to Veterans Treatment Courts:

Testimony on Veterans in the Criminal Justice System (September 2015)