"Soft Rollout" of IDNYC's Veteran Designation - Go Get One, But Be Prepared

The good news is that NYC government has finally implemented the veteran designation we were promised last year by Mayor de Blasio, and that we’ve gotten exactly what we asked for in the Change is Essential report we released last month, plus a several additional benefits. We appreciate all the work that MOVA and many dedicated officials at City Hall and the City Council put into what we believe to be a very solid program that recognizes NYC veterans in accordance with the City Charter. This is a good thing.

The not-so-good news is that the “soft rollout” starting this week has some hiccups. I went to the Bronx VA Medical Center today to see for myself how this "popup" site was working. The Bronx VAMC is advertised as a site where veterans can go to get their own IDNYC with veteran designation, and that it is open between 8 am and 4 pm. As of this writing, no appointments can be made for this site online, and there is no appointment required for this location. I arrived just before 3 pm, drenched from a walk in the rain from the Kingsbridge 4 train station.

The friendly security staff at the door pointed me in the right direction to find the corridor where IDNYC is set up. I approached a crowded and somewhat chaotic waiting area to first find an exasperated veteran who seemed impatient with the process. The seats were full of people waiting, and others wandering in the narrow corridor. There was one IDNYC staff member at the doorway who was helping a person who identified herself as a non-veteran, and the IDNYC staff member proceeded to intake all of her information into an iPad to make an appointment for her. (A VA employee later told me the site had been taking both veteran and non-veteran appointments all day.) As I waited, I asked people in the waiting area what the process was. They told me all the appointments were being taken first, then walk-ins would be taken afterward. The walk-ins had been waiting for quite some time.

When I spoke with the IDNYC staff member, she explained that appointments are being booked first, and that she could input an appointment for me (she pointed to her iPad) for the following day. I explained that I had tried to make an appointment online, but that the Bronx VAMC isn't a site listed, and that the information I read said no appointment was required. Plus I also had just traveled more than an hour from Brooklyn to come try out the popup site to get my veteran designation. She impatiently told me I couldn't be seen within the next hour, and to call 311 and make an appointment for another location closer to me because all IDNYC locations are now offering the veteran designation. 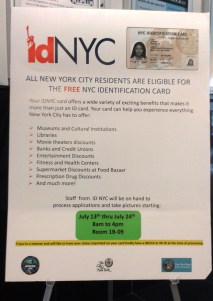 IDNYC sign at the Bronx VAMC. Which hallway? If you're not familiar with the building, you'll want to ask someone.

All told, there are far worse ways to spend an afternoon. I should have called 311 before assuming that "no appointment necessary" meant that I could actually walk in and be served, even alongside the other exasperated walk-ins who'd been waiting a while. A VA employee I spoke with later explained to me that there had been computer problems throughout the day, and that non-veteran appointments are served equally even at this site intended to roll out the veteran designation. We expect hiccups with a new program, and it was frustrating to be turned away (or made to wait, as other veterans were) while non-veterans were being served by this "popup" location. Nevertheless, I plan to get my IDNYC at a later date.

If you haven't yet, be sure to check out the many benefits offered by the veteran designation on IDNYC. I encourage all NYC veterans to stand up and be recognized for your service in this way, plus get your free membership to visit the Intrepid and to access a number of discounts that leading retailers would like to offer you in return for your military service.

But before you go, make sure you call 311 or make an appointment online. And expect that there may be some hiccups with this new program.

Did you get your IDNYC with veteran designation yet? What was your experience? Let us know in the comment section below, or add a comment on our Facebook page.