Veterans have long wanted an easier way to prove their veteran status than carrying around copies of their DD214s, and it looks like the federal government is on the verge of passing legislation to create official veterans ID cards, separate from Veterans Health Administration ID cards issued only to veterans that meet eligibility requirements for health care. Read this morning's news story about this here. 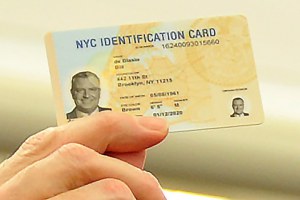 This federal decision comes ahead of the veteran status indicator promised to us last year by Mayor de Blasio for ID NYC cards. In the 2015 Survey of NYC Veterans Policy Priorities, respondents indicated they thought inclusion of veteran status on ID NYC cards was important. Below is background information and recommendations from our recent report on the survey. The full report can be viewed here: Change is Essential: Report on the 2015 Survey of NYC Veterans Policy Priorities

Earlier this year, NYC ID cards were launched, and the Mayor stated that veteran status would be included, although this has yet to be implemented. A total of 70.88% of respondents indicated that they view this as either essential or very important. 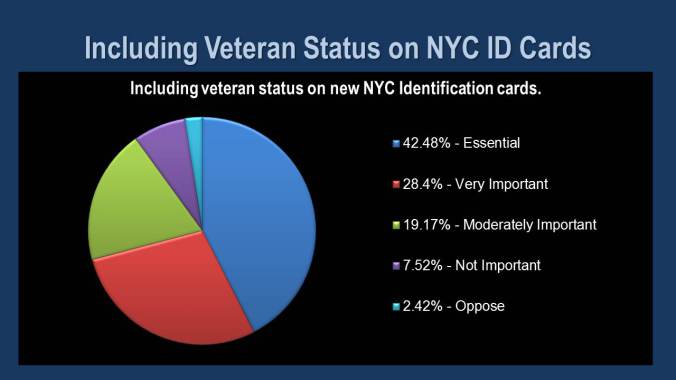 IDNYC Cards. The new “IDNYC” card is an optional identification card for NYC residents ages 14 and older, and requires only proof of identity and residency.[1] The intent of the ID card is to provide a means of identification for all city residents, enabling them to access government facilities, libraries, banking services, and other institutions, and to be able to identify themselves to law enforcement with an ID card that does not require proof of citizenship, immigration status, or housing status. IDNYC is accessible regardless of language proficiency or disability. Certain benefits and discounts are extended to IDNYC card holders.[2]

Veteran Status on NY State Driver License and Photo ID. Honorably discharged veterans can show proof of service by mail or at a Department of Motor Vehicles office to have the word “veteran” printed on their driver license, learner permit, or non-driver photo ID card. Proof includes DD 214 or other discharge papers (if released prior to 1950) showing honorable discharge.[4]

The term "veteran" means a person who has served in the active military service of the United States and who has been released from such service otherwise than by dishonorable discharge. [5]

Recommendations. The intent of IDNYC is to expand access to government identification cards for NYC residents who might otherwise not be granted one, and this should also include a broader definition that recognizes the military service of veterans who otherwise have gone unrecognized. This is not to grant unearned benefits, but rather to prioritize recognition of a veteran’s military service over circumstances that might have been problematic or unjust. We therefore offer the following recommendations: