Earlier today we joined NYC Public Advocate Letitia "Tish" James, Paul Rieckhoff and members of the Iraq and Afghanistan Veterans of America (IAVA), and other veterans and veteran advocates at City Hall to call on Mayor de Blasio to support the proper resourcing of veterans affairs for NYC. Our delivered remarks were abbreviated due to time constraints, but below are the full prepared remarks for today's event: 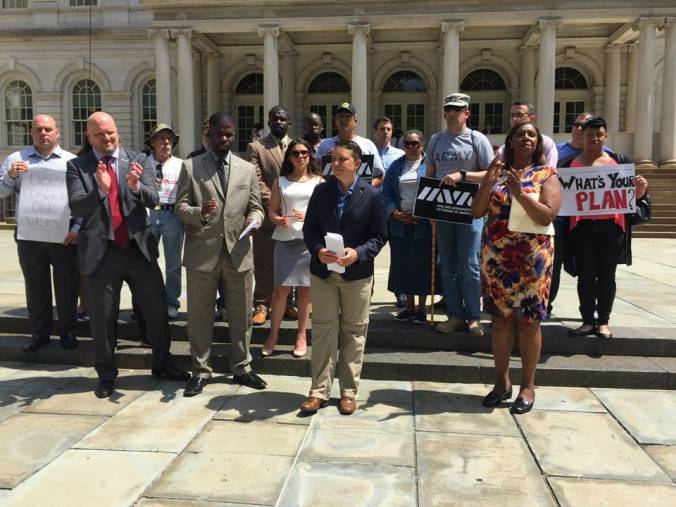 Good morning. My name is Kristen Rouse, and I represent the NYC Veterans Alliance. I am an Army veteran, I served three tours in Afghanistan, and I live in Brooklyn.

I wish we didn’t have to explain to Mayor de Blasio that veterans issues are progressive issues, and that he should care about them. Veterans are a unique category, but we come from all walks of life and all economic backgrounds. We are men, women, black, white, Latino, Asian, Native American, Muslim, Christian, Jewish, LGBTQ, and represent the beautiful diversity of this country and this city. Our distinction and common cause is that we all raised our right hands and swore to defend the Constitution and our nation’s interests, even if it meant our lives. It’s something that brings us together across beliefs, party affiliations, and generations.

Our home country and our home city have special meaning to us because we’ve literally put our lives on the line in their defense. This is why it’s so personal that Mayor de Blasio has taken the position—as stated in a Memorial Day op-ed in the Daily News—that the current understaffing and under-resourcing of the Mayor’s Office of Veterans Affairs “is as it should be.”

MOVA currently doesn’t have enough staff to field a softball team, let alone manage and coordinate veterans affairs for the largest municipal government in the nation. New York City has more than 220,000 veterans, plus an additional 250,000 spouses and dependents who are affected by veterans policies. Together, this number represents approximately one in sixteen NYC residents whose lives are affected by MOVA’s ability to manage complex programs and resources across city government. Mayor de Blasio needs to recognize the importance of this critical function and get behind resourcing, staffing, and empowering an independent agency to manage the city’s veterans affairs.

Commissioner Sutton, a veteran herself and for whom we have the utmost respect, has responded to our criticisms by saying we aren’t getting the facts right. She stated yesterday that the Fiscal Year 2016 Executive Budget provides around $150 million across more than a dozen city agencies for programs and services that benefit veterans and their families. This was the first time the administration has named a dollar amount for veterans resources—and it is news to us. It is especially news to us because if you comb through the Executive  Budget documents on OMB’s website, you find that the only mention of veterans is to show a slight increase from last year in MOVA’s staff salaries and the amount allocated for office supplies and travel reimbursements.

Veterans affairs for the largest city in the nation is a big job. We believe that this is at least a $150 million job. But that $150 million needs a coordinated vision and oversight—and the staffing to accomplish that oversight. It is true that each city agency has an appointed Veterans Liaison—but Commissioner Sutton herself said in a hearing in April that there hasn’t been any recent training or coordination of those liaisons, and we have no idea how MOVA will find the time to develop the programmatic training needed for them to shift away from their current role in tracking veteran employees to becoming more helpful in overseeing veterans affairs for the city. There simply are no shortcuts for MOVA—they need more than a Commissioner and five staff members.

Veterans affairs in NYC is at least a $150 million job—and it must go beyond this as well to act as a local watchdog to ensure that federal and state resources and institutions are meeting their obligations to veterans. We read national news headlines and see the continued problems with VA healthcare facilities in NYC. The Bronx VA is under investigation for financial fraud. The Brooklyn VA just announced it is closing a 25-bed inpatient unit and leaving patients from Staten Island, south Brooklyn, and south Queens without an accessible option for hospitalization. They will be directed instead to the Manhattan VA—which has its own problems, to include ongoing construction and renovations from damage by Hurricane Sandy.

A Commissioner and five staff members simply aren’t enough to manage veterans affairs for the largest city and the largest municipal government in the country. The City Council acknowledges this and stands ready to create an independent and resourced Department of Veterans Affairs. The Public Advocate supports this. Why can’t a progressive mayor acknowledge and support this?  We served this country and make this city our home. We earned benefits and recognition. We carry the consequences of war with us every day. Yet we keep having to ask—Mayor de Blasio, when will you show us that veterans matter to you?