Last night we were pleased to see the Mayor’s office press release saying he will meet this morning for the first time since taking office eighteen months ago with the city’s Veterans Advisory Board along with senior military leaders in honor of Fleet Week and Memorial Day. This is a positive first step toward bridging the divide between Mayor de Blasio and the 220,000+ veterans and the 250,000 more spouses, dependents, and other family members of veterans who reside in NYC.

Unfortunately, none of these measures will be in the Mayor’s announcement. We learned this morning that Mayor de Blasio will simply announce that he is no longer opposed to the Veterans Equality Act. As you remember, last fall the Veterans Equality Act passed both the NY State Assembly and Senate, and--had it not been vetoed--it would have updated eligibility for NY State and NYC employees to “buy back” up to three years credited toward their pension at a reduced rate based on their years of military service. The existing law grants eligibility only to veterans who served in designated combat areas long prior to 2001, which has resulted in Iraq veterans being eligible, but Afghanistan veterans not being eligible—to name but one disparity. Last fall Mayor de Blasio lobbied Governor Cuomo to veto this broadly-supported and long-overdue bill because he thought it would cost too much.

The Mayor was wrong last fall—and it is important that he make right on his deplorable action against veterans in civil service. But this change of position--while the right thing to do--isn't the kind of announcement he should be touting in honor of Fleet Week—a celebration of the U.S. Navy—and in advance of the somber holiday of Memorial Day, when we remember all those who made the ultimate sacrifice in our nation’s wars. Mayor de Blasio should humbly ask forgiveness for making the wrong decision last fall, not announcing this as new "support" for veterans. If Mayor de Blasio wants to show true support for veterans--he can and must do better than simply announcing he is no longer opposed to updating eligibility for the benefits veterans have earned.

As IAVA has pointed out, the City of Boston spends $5.5 million on city-level veterans affairs, while NYC spends a mere $300,000 in city tax dollars on MOVA. Boston has half the number of veterans NYC does. Mayor de Blasio has a very long way to go before NYC veterans will see him as being supportive of veterans and our families.

We admire the hard work of Commissioner Sutton and her small staff with the extremely limited resources they've been given. We support any veterans the Mayor’s office has managed to recruit to march alongside him in the Littleneck-Douglaston Memorial Day Parade on Monday. But we remain very, very discouraged by Mayor de Blasio’s continued tone-deafness and disregard toward the NYC veterans community. We hope the newly appointed members of the Veterans Advisory Board can get this through to him.

Memorial Day weekend shouldn't be a time for politics—it must be about solemn reflection. It's about remembering friends and loved ones lost on the battlefield. Remembering those lost after they came home because they were overcome by the physical and mental injuries they suffered in combat. Remembering those still battling against post-traumatic stress, brain injuries, poisoning from Agent Orange, burn pits, and chemical agents, and other injuries from the battlefield. And remembering the families still missing loved ones as if the loss happened yesterday.

We will join IAVA in their #GoSilent campaign by going silent at 12:01pm EDT on Monday as they lay a wreath at the Tomb of the Unknown Soldier at Arlington National Cemetery. Please join us in this wherever you may be.

Wishing everyone a reflective, peaceful, and safe Memorial Day weekend. 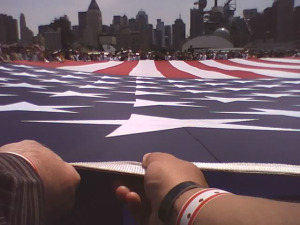 Memorial Day ceremony on the deck of the USS Intrepid, 2009