Testimony on Oversight of the Mayor's Office of Veterans Affairs

Today at City Hall, the City Council Committee on Veterans, led by Council Member Eric Ulrich, was a hearing on oversight of the Mayor's Office of Veterans Affairs (MOVA). Commissioner Loree Sutton promised specifics, but did not deliver--unless we consider the litany of organizations and agencies she listed at length as having met with since September to be her promised specifics. She referred numerous times to a "strategic plan" for the administration to end veteran homelessness, to address veterans mental health, and to place veterans into good employment. But the Commissioner offered no specifics--no dedicated staff, no amount of funding, and no timelines--and no reference to any printed or published plan that citizens might expect to see from government officials. 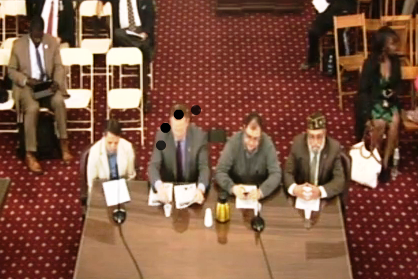 There are many things going well in NYC as a result of targeted funding from the Obama administration in recent years that has dramatically reduced veteran homelessness-to include the $22 million provided directly to service providers by the VA as the Supportive Services for Veterans and Families (SSVF) program--and Commissioner Sutton is no doubt providing solid input and guidance in the continued effort to find homes for all homeless veterans in NYC by the end of this year. This is great news, and it shouldn't necessarily matter who takes credit for it. But, as we've pointed out before, it seems disingenuous for the de Blasio administration to tout a targeted federal program as their own in order to end any further public conversation about veterans' concerns or, in the case of today's hearing, the need to increase resourcing of MOVA and create a more coherent agency and system for overseeing veterans affairs in NYC.

The Commissioner mentioned several other initiatives that we hadn't heard before. It's clear that Commissioner Sutton is actively meeting with veterans, organizations, and agencies across NYC. But what remains unclear is what MOVA's focus and outcomes will be, and how the mission will be accomplished with such limited resources. In other words--a strategic plan.

The full video of today's hearing is located HERE.

In response to the Commissioner's comments and time constraints on individual testimonies, the following spoken remarks were offered by Kristen L. Rouse:

Good afternoon, Council Member Ulrich and Members of the Committee, Commissioner, distinguished guests. My name is Kristen Rouse and I am speaking on behalf of the NYC Veterans Alliance. I am a veteran of the United States Army, I served three tours in Afghanistan, and I have lived in Brooklyn since leaving Army active duty in 2007.

While we appreciate the service and efforts of Commissioner Sutton, the Mayor’s Office of Veterans Affairs is little more than a symbolic office. With only a Commissioner and five staff members, MOVA doesn’t have enough people to field a softball team, let alone oversee veterans affairs for the nation’s largest city. This affects not only the City's more than 220,000 veterans, but also more than 250,000 spouses and dependents also impacted by veterans benefits and programs in NYC. This in total represents about one in sixteen NYC residents who MOVA’s functions—or dysfunctions—directly affect.

Today we heard the Commissioner’s statement, and listening to that we completely understand that MOVA gets around and has a long meeting calendar with many agencies and organizations, which we’re glad to hear. But meetings themselves are not outcomes. The number of addresses or names in an email list or on a meeting calendar are not performance metrics.

We’ve heard for some time now about vague plans and initiatives by MOVA. But as Council Member Vallone pointed out, the $54 million mental health initiative released by the Mayor in no way mentions veterans, and it does not validate the mental health initiative [for veterans] that the Commissioner has told us about for some time now. So we’re wondering—where is the strategic plan of which the Commissioner speaks? Where are the specifics, and where is the funding behind all of these initiatives [for veterans] that we keep hearing about? We’re happy to hear the VA’s reported success rates, but we’re wondering if the Commissioner actually matches up those success rates with veterans in the community who might have something else to say.

The Commissioner states the need for all of us to be talking about the same facts, yet she seems to gloss over the SSVF programs or other federal funding and programs that she is only tangentially involved with as a city official, and not empowered to in any way oversee.

We offer some recommendations on moving forward with MOVA or a future Department of Veterans Affairs:

I could go on, but thank you for the opportunity to speak today.

Our full prepared testimony is below:

Hearing on Oversight of the Mayor’s Office of Veterans Affairs

My name is Kristen L. Rouse, and I am speaking on behalf of the NYC Veterans Alliance. I am a veteran of the United States Army, I served three tours of duty in Afghanistan, and I have lived in Brooklyn since leaving Army active duty in 2007.

One of the reasons I love New York City is its incredible history of taking pride in its military and veterans—from the Revolutionary War battles fought on this soil to the hundreds of thousands of troops who sailed on crowded ships from New York Harbor to fight in wars overseas—to now being home of the largest Veterans Day parade in the country. New York also has a history of providing for its veterans, like the city-subsidized housing at Peter Cooper Village in Stuyvesant Town that gave affordable housing to thousands of veterans and their families after World War II.

Yet despite this proud history, and despite thousands of men and women deploying to wars on multiple fronts since 2001, no recent NYC mayor has truly prioritized the more than 220,000 NYC veterans who stepped up proudly to serve this country during times of both war and peace. We appreciate the service and efforts of Commissioner Sutton, but the Mayor’s Office of Veterans Affairs offers little more than a symbolic role, with only a Commissioner and five staff members. MOVA doesn’t have enough people to field a softball team, let alone oversee veterans affairs for the nation’s largest city. This affects not only veterans, but also more than 250,000 spouses and dependents also impacted by veterans benefits and programs in NYC. This in total represents about one in sixteen NYC residents who MOVA’s functions—or dysfunctions—directly affect.

MOVA’s entire annual budget is just $600,000, nearly all of which goes to staff salaries. Half of this amount is funded by a New York State grant. That means NYC in actuality spends only $300,000 in city tax dollars on MOVA’s critical functions—that’s little more than one dollar per year per veteran. This simply is not enough. We therefore offer the following recommendations:

A recent study by Got Your 6, a national veterans coalition, showed statistical proof that veterans are more engaged in our communities than our civilian counterparts—we volunteer more, more of us donate to charity, more of us regularly vote in elections, we do more to help our neighbors, and we’re more active in community organizations and government. Veterans have a lot to offer NYC, and those of us who live here do so because we love this city and care about it. NYC can and must lead the nation in welcoming veterans and integrating them into all aspects of what makes New York the greatest city in the world, from business and entrepreneurship to public service, academics, entertainment, and the arts. But NYC can’t do that with just symbolic representation and empty talk. We need more than six people. We need more than one dollar per veteran. We strongly urge you to prioritize veterans affairs with the funding, oversight, and leadership this city deserves.