Statement at Veterans Advisory Board Meeting

Last night was the first NYC Veterans Advisory Board meeting ever open to the public. We applaud the important reforms that led to this meeting, and to the appointment of new VAB members. Previous members of the VAB were present, as well as new members. The meeting was chaired by the Commissioner of the Mayor's Office of Veterans Affairs (MOVA), Loree Sutton.

For the first time since being appointed Commissioner in August 2014, Sutton announced the basic points of the de Blasio administration's agenda for NYC veterans, to include ending veteran homelessness, holistic mental health resources for veterans, and a citywide jobs program for veterans. She did not describe specifics on funding, staffing, timelines, or implementation of these initiatives. 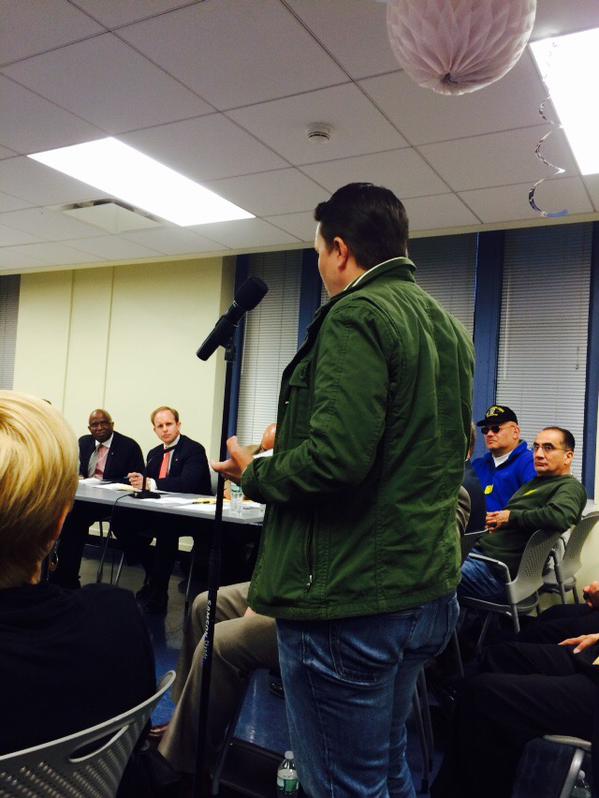 Given just a few minutes to speak, Kristen L. Rouse made the following points to the Commissioner and the new VAB members:

We are pleased to see this meeting open to the public for the first time, and to begin getting to know the new VAB members, including Sam Innocent, one of our advisory board members. Commissioner, you spoke of many important issues, which we support. But we are very concerned about the specifics.

How will MOVA, with no substantial increase to its $600,000 annual budget or staff, administer all of these important programs?

Many of us feel abandoned by Mayor de Blasio, and feel that he values the opinions of Iowa voters more than he does the more than 220,000 veterans living in this city. We were disappointed to see that three veterans benefits counselors working for MOVA were lost last summer due to lack of funding.

We were glad to hear the Mayor talk about the importance of ending veteran homelessness in his State of the City address earlier this year, but we've heard nothing about how MOVA or the city is administering the $3.4 million annual grant that comes from the Obama administration. We're glad to hear it mentioned, but what the Mayor didn't mention is that this is a federal program. We haven't heard what NYC is doing differently than other cities receiving the same funding, such as New Orleans, which just announced its success in ending veteran homelessness.

We are glad to hear that veteran homelessness, mental health, and jobs are all priorities for MOVA and the Mayor. But again, how, with no substantive increase to MOVA's budget or staffing, will the administration oversee these programs? How will it oversee the discretionary funds from City Council given annually to different veteran service organizations (VSOs) in NYC to ensure the funds are being used for their intended purposes--and do those purposes overlap or integrate with the administration's priorities?

It's great to hear that veteran jobs are a priority for the city. Yet, even though there are some civil service credits granted to veterans, there is not currently an across-the-board veteran hiring preference by NYC government (the city's largest employer). And speaking of jobs, we were disappointed that last year Mayor de Blasio actively lobbied against a bill that passed the New York State legislature that would've granted pension buyback eligibility to Afghanistan veterans and others--but the Mayor said it was too expensive and the Governor vetoed it. We were also disappointed that last year the city's Small Business Services recommended against making veteran-owned businesses competitive alongside minority- and women-owned businesses for city contracts. We want to see veteran jobs prioritized, but so far the Mayor's record has been disappointing.

All of what we're seeing here tonight is forward progress, and we appreciate everyone coming together on this. But we have very specific concerns, and we want answers. Thank you.