Remarks at City Hall: NYC Veterans Alliance Calls on Mayor de Blasio to Be Our Mayor, Too

Remarks delivered by Kristen L. Rouse in front of City Hall on April 16, 2015:

New York City has an incredible history of taking pride in its military and veterans—from the battles fought on this soil in the American Revolution to the hundreds of thousands of troops who packed on crowded ships in New York Harbor, bound for wars overseas—to now being home of the largest Veterans Day parade in the country. New Yorkers have always been proud of their veterans—even providing City-subsidized housing like Peter Cooper Village in Stuyvesant Town, where tens of thousands of veterans returning from World War II and their families benefited from the City’s effort to welcome veterans home from war and integrate them as vital citizens of the greatest city in the world. 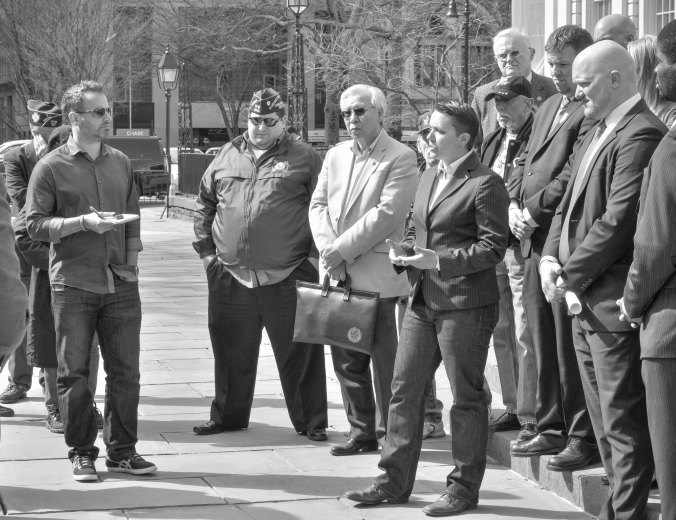 Veterans shouldn’t have to ask New York City’s Mayor to acknowledge us. We shouldn’t have to ask our Mayor to give more than a symbolic role to the Mayor’s Office of Veterans Affairs (MOVA)—an office of five staff members whose salaries comprise nearly all of its $600,000 annual budget—and for which the city receives just over $300,000  in State money to fund. That means New York City in actuality is spending only $300,000 in City tax dollars to connect our City’s nearly a quarter of a million veterans with the benefits, services, and appreciation they’ve earned through their military service. That’s little more than one dollar per year per veteran that the City is willing to spend. We shouldn’t have to ask our Mayor to allocate more than a dollar per year for each of us who have served this country.

Yet here we are today. Mayor de Blasio has been out of touch with veterans since he took office. He delayed appointment of a new Commissioner of Veterans Affairs for nine months. Once a new Commissioner was in place, he gave her 90 days as a “review period” to effectively not do anything but talk to people, thereby losing an entire year of making any new progress on behalf of the City’s veterans. The Commissioner said she would provide the Mayor a report of those 90 days. We have never seen nor heard the results of this 90-day report. We have never heard the Commissioner or the Mayor speak on any comprehensive plan for the City’s veterans.

Earlier this year Mayor de Blasio announced a program to end veteran homelessness—a noble endeavor—but what he didn’t mention is that this program is wholly funded by a $3.4 million annual grant provided by the Obama administration. Anyone can view this as a revenue line item in the City’s budget. We appreciate that he took the time to mention the seriousness of veteran homelessness—but the announcement was misleading in that Mayor de Blasio and MOVA are providing no new ideas here beyond the hard work that has already been done at the federal level.

Make no mistake: Mayor de Blasio has made no substantive increase in MOVA’s tiny budget since he took office. Mayor de Blasio has not even been willing to listen to the solid recommendations made by Speaker Mark-Viverito or Council Member Ulrich or the City Council Veterans Committee to increase spending on veterans affairs and add new programs to serve the veterans who are still struggling to find their way in this City. Mayor de Blasio’s record on veterans thus far can only be summed up as tone-deaf disregard for veterans AND our advocates in the City Council.

New York City can and must identify itself as a veteran-friendly City. Mayor de Blasio, you can and must lead on this. Veterans from all walks of life, from all generations, men and women from all races, creeds, religions, and national origins, have stepped up PROUDLY to serve this country and this City. You should welcome them here. You should show veterans that you care about their service, that you’re willing to spend more than $1 per year per veteran in City tax money to ensure they succeed after their service. You should tell us what your administration’s plan is to ensure that veterans of all generations who have proudly served this country are able to thrive and succeed as valued citizens of this City. Mayor de Blasio—your veterans want you to be our mayor, too.