On March 19, the NYC Veterans Alliance was honored to have Samuel Innocent testify in support of the NYC Council's resolution calling upon the New York State Legislature to pass and the Governor to sign the Veterans' Education Through SUNY Credits Act. Innocent is a former Army sergeant and combat medic who has gone on to become an advocate for student veterans both as a student and now as a professional. He shared some of his powerful personal story in his testimony to illustrate the importance of legislation that ensures all NY State institutions properly grant credit where it is due for military education and experience. 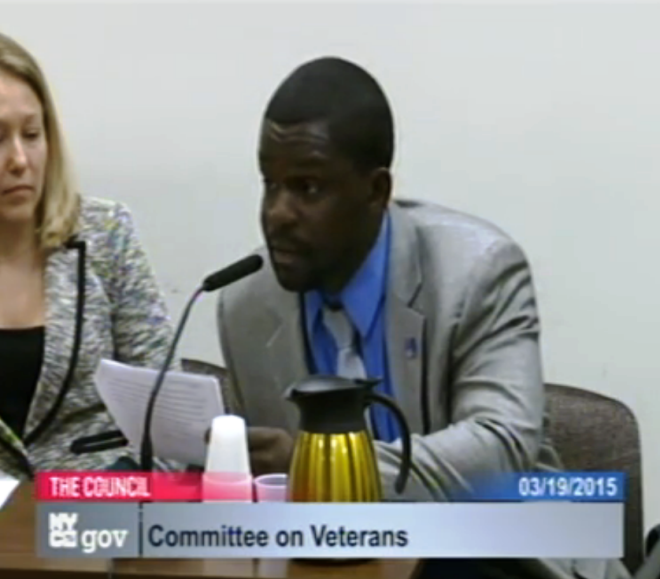 Samuel Innocent testifies before the NYC Council on March 19, 2015

Innocent's testimony was well-received by the Veterans Committee, and Chairman Ulrich encouraged us to contact our representatives in the NY State Legislature to co-sponsor the Veterans’ Education Through SUNY Credits Act.

You can view the video of the hearing HERE.

The full testimony is below:

My name is Samuel Innocent, and I represent a newly formed grassroots organization called the NYC Veterans Alliance. I am a former Army medic of 7 years and a proud veteran. I currently work for the City University of New York in the office of Veterans Affairs. I testify today not on behalf of the City University of New York but on behalf of student veterans within the CUNY system—current and future veterans who deserve to have their military education and work experience count towards their academic endeavors.

There are currently 2,784 student veterans in the CUNY system who are tracked as veterans. When we estimate those which are not being tracked for any number of reasons, that number increases to 3,000-plus.  Of this body of student veterans the median age is 27.

While I cannot tell the story of each and every one of these veterans, I can tell my own and hope that it will help emphasize why veterans in the public school systems of New York deserve credit for their military education and work experience.

I came to The City College of NY (CUNY) in January of 2011 following the completion of my term of active duty. Though I had an Associate’s degree and 70- plus credits from Jefferson Community College (SUNY), only 34 of those credits counted toward my academic records at CUNY. Of these 34 credits, none were from the military; they all came from night classes that I attended at Jefferson Community College after my military workday. Jefferson Community College, given its close proximity to Fort Drum and understanding of the military, granted me about 30 credits for my military education. As a nationally certified EMT, JCC granted me credit for all of the Army medical courses they recognized as equivalent to those that they offered, while City College did not—even though City College offered equivalent curriculum through their continuing and professional studies program.

This began my two-year journey of advocacy at The City College of New York to persuade the administration to evaluate all military transcripts and award credit where it was due. After two years of meetings, petitions, and advocacy, the student veterans of City College and I succeeded in getting the school to evaluate military transcripts for credit and to also allow for early registration in order for veterans to maximize their benefits. This was a win, but it should not have been a struggle—and it should apply to all public colleges statewide.

The final part of my personal experience does not speak to the end of my journey, but rather the beginning. When exiting the military, I applied for reciprocity in order to change my national EMT license to a New York State EMT license so that I would be able to work part time while in school. I served as a combat medic on foot patrols and in clinics in Afghanistan, taking care of soldiers on the battlefield, and I also served stateside in military hospitals at Fort Drum and West Point. I am thankful that New York State granted me reciprocity for my experience, and it lasted two years. I ask of the higher education representatives present today; if New York State saw fit to grant me a professional license for my military coursework, certifications, and experience—why can’t our academic institutions do the same?

In closing, passing this legislation would not only ease the transitions of veterans into academia and into their civilian lives, but it would also begin to provide a baseline standard of how we value the years of service and professionalism these young men and women have given to not only the state of New York, but to their country.  We cannot give them back the years in which they were young and without much obligation, the years in which they were free to take risks. They’ve spent those years in service to us. We should show them that those years were precious to us too.