You've responded to the 2015 Survey of NYC Veterans Policy Priorities, and your voice has already been heard by public officials. Yesterday was the first-ever testimony of the NYC Veterans Alliance in a City Council hearing, and we were definitely heard. 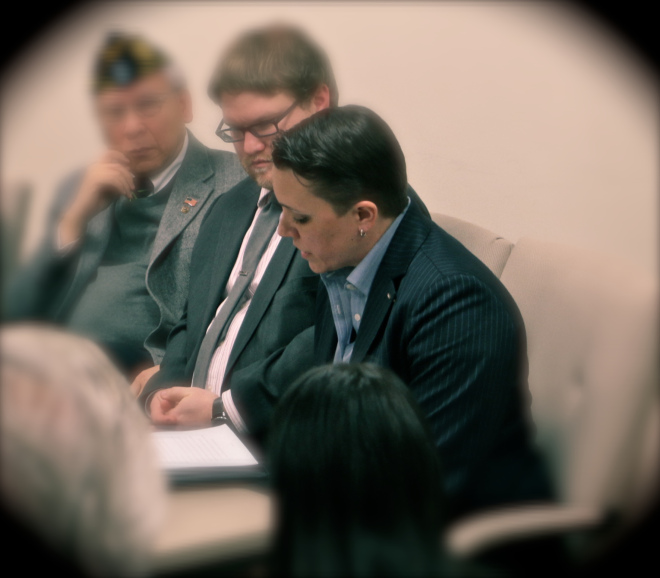 Yesterday the NYC Council Veterans Committee held a hearing on two bills (Ints. 611 & 619) that, if passed, would reform the Veterans Advisory Board, and a third bill (Int. 600) that would require certain City agencies to report annually on the numbers of veterans receiving City services.

You can watch the full video of yesterday's hearing HERE. Our testimony begins at the 41:40 mark, and questions from Council Members follow the first round of testimony. We were also live-tweeted by the Gotham Gazette's own Kristen Meriwether: 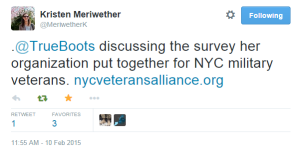 Below is the full testimony. Your survey responses thus far are part of this testimony, as was the input of the NYC Veterans Committee Working Group, in addition to collaborators from Partner Organizations. Thank you for being part of our truly collective voice on these important issues.

Hearing on Reform of the Veterans Advisory Board

My name is Kristen L. Rouse, and I represent a newly formed grassroots organization called the NYC Veterans Alliance. I am a veteran of the United States Army, and I served in Afghanistan in 2006, 2010, and 2012, for a total of 31 months deployed. I personally believe New York City is the greatest City in the world, and there’s no place I’ve been prouder or happier to come home to than here. It’s been clear to me that New Yorkers truly appreciate military veterans, but our City’s government still has a long way to go before we can claim that NYC is truly a veteran-friendly City.

One key area we need to improve upon is ensuring that the voices of all veterans—from the distinguished veterans who served us in World War II, Korea, and Vietnam, to the forgotten veterans who stood at guardposts across the globe during the Cold War, to those who served in Panama, Mogadishu, Desert Shield and Desert Storm, and Bosnia, to the men and women like me recently coming home from the wars in Iraq and Afghanistan—and even those left behind, left out, or under-served by bureaucratic snafus and inadequate support when they came home. All of these voices, needs, challenges, and blueprints for success must be present in the conversations NYC government is having about its veterans. These hearings have been important in this process, and we commend Council Member Ulrich and the Veterans Committee for these vital public discussions and the legislation we hope will result.

Earlier this month, the NYC Veterans Alliance launched a survey asking the NYC veterans community to rate their policy priorities. Among other issues, we asked respondents to prioritize the reform of the Veterans Advisory Board. The survey is open through the end of February, and we still have responses coming in. Yet even with these preliminary results, responses thus far from our community have overwhelmingly favored reform:

We fully support proposals to increase the number of appointees to the VAB and make appointee contact information, meeting information, and proceedings open to the veterans community. We believe these measures have the potential to make the VAB a more transparent, effective, and representative body serving the veterans of NYC. We urge the City Council to take prompt action on these important reforms, and we offer these additional recommendations:

We have the largest city government in the country, and we have the one of the largest urban populations of veterans in the U.S. Yet to date there has been no coherent tracking, reporting, or coordination of the services NYC government is delivering to its veterans. We fully support the intent of Int. 600, and recommend two changes:

It must be noted here that many discharges characterized as “other than honorable” or “dishonorable” were the result of minor offenses related to PTSD or other effects of military service that were either misunderstood or mistreated at the time. Many of those discharged for homosexuality prior to the repeal of “Don’t Ask, Don’t Tell” still retain an adverse status. The process for upgrading the character of a discharge can be long and problematic, and while discharge status is key to eligibility for VA benefits, discharge status should not be a determining factor for tracking of services provided to veterans by NYC agencies.

Our survey has shown overwhelming support thus far for all NYC agencies providing services to veterans to track and report the number of veterans receiving those services: 61% of respondents say this is “essential,” another 25% call this “very important,” and 12% call it “moderately important”—for a total of 98% of respondents indicating that this issue is important to them. We urge the City Council to take prompt action accordingly.