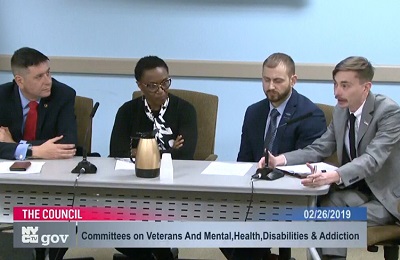 On February 26th, 2019, Samuel Molik, Director of Policy and Legislative Advocacy, testified before the NYC Council's Joint Committees on Veterans and Mental Health, Disabilities & Addiction in an oversight hearing on veteran suicide and mental health:

Good afternoon and thank you to the Committee Chairs for the opportunity to testify today. My name is Samuel Molik and I am the Director of Policy and Legislative Advocacy for the NYC Veterans Alliance, a member-driven, grassroots policy advocacy and community-building organization that advances veterans and their families as civic leaders.

On behalf of our members and supporters, I first would like to thank the chairs of both committees on holding this hearing today and bringing attention to the crisis of suicide and mental health within the veteran community. This is an issue our members have consistently brought forward as a top priority, and we have brought this before the Council numerous times, in addition to addressing this in our nation’s Capitol alongside House Veterans Committee Chair Mark Takano and Iraq and Afghanistan Veterans of America. Veteran suicide is a national crisis, and one that requires marshaling all available resources within state and local governments to address the complex risk factors and find real solutions. Our nation needs veterans to continue to lead, serve, and make our communities better—we cannot continue to tolerate these preventable deaths.

The U.S. Department of Veterans Affairs publishes suicide statistics each year, and the data only becomes more alarming over these many years of conflict abroad and the advancement of veterans of many generations into categories that increase their risk. The VA’s data shows an ongoing crisis, even as the VA itself has failed to expend its designated budget for suicide prevention. Yet we have many reasons to believe the VA’s data does not capture the full extent of veteran suicide; it reports only veterans who have died showing a clear action or intention to die by suicide. The data does not capture overdoses or high-risk behaviors resulting in death unless this clarity of intention can be established. Countless veterans who have died after giving up hope of living go uncounted in these figures. We must do better as a community in tandem with our partners in government to avert this crisis.

Last year’s VA report on suicide identified a national average of 20 current or former service members who die each day by suicide—a rate more than twice the rate of our civilian counterparts. Rates of suicide were highest among veterans under the age of 34, while the larger population of veterans aged 55 and older accounted for more than 58 percent of recorded veteran deaths by suicide. The rate of suicide of younger veterans continues to rise, as does the percentage of suicides resulting from firearms. In the State of New York, veteran deaths by suicide are lower than the national average, but still represent a rate nearly double that of our civilian counterparts in our state.

The suicide crisis is increasingly getting attention, but less attention has been paid to the risk factors. The top three risk factors are as follows:

Other high risk factors must also be addressed. Veterans with a history of incarceration and ongoing legal issues are at high risk for dying by suicide. Veterans with untreated substance abuse histories are at high risk. Veterans with untreated PTSD are at high risk. Despite there being a clear correlation between military sexual trauma (MST) and depression, PTSD, and self-harm(12), a recent report showed that the VA wrongfully denied more than 1,300 veteran claims of MST within a 5-month period last year(13), keeping them from receiving services and benefits to which they should otherwise be entitled. This points to larger systemic problems with the processing of MST claims by the VA.

We strongly urge the Council to work with the advocacy community to develop and strengthen policy solutions attacking the complexities of each of these risk factors leading to veterans dying by suicide. We recommend the Council and the Administration take a more proactive approach to working with local VA Medical Centers and Vet Centers to ensure quality care is available and that veterans feel welcome to seek that quality care. We recommend continued efforts to move homeless veterans into permanent housing, and targeted efforts to ensure veterans can find and maintain affordable housing through historic preferences in lotteries and waitlists. We recommend the Council and Administration to work with Veterans Treatment Courts in each borough to ensure they receive the resourcing and support needed to divert veterans away from incarceration into programs that help them restore their lives. We recommend the Council continue to support efforts to provide free and confidential mental healthcare to veterans and family members outside of the VA as well, to include our community partners at the NYU Langone Military Family Clinic and NY Presbyterian Military Family Wellness Center.

Our list of recommendations is long, and more will be included in the Policy & Legislative Agenda we will release next month. We applaud the Council for holding this hearing, and we look forward to the work ahead in reducing the risk factors of veteran suicide. Thank you for the opportunity to testify today. Pending your questions, this concludes my testimony.