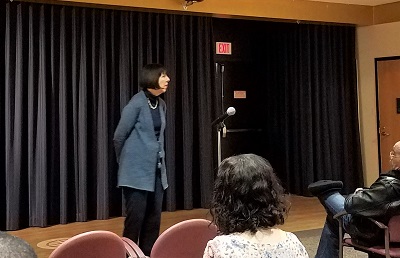 On Tuesday, January 30, 2018, Martina Parauda, Director of the VA NY Harbor Healthcare System, held a town hall for veterans and the Manhattan VA. Here is a brief summary of the information she provided for our community:

More than seven years following Superstorm Sandy, the Manhattan VA is still undergoing repairs and upgrades. These include the replacement of all of the elevators at the Manhattan VA, which will be completed two elevators at a time over the next two years. The facility’s chapel on the lower level has undergone complete renovation, but is not yet open due to other construction; services are being held on another floor (please inquire at the information desk). The most significant impact of Superstorm Sandy was the need to completely replace the facility’s electrical distribution system, which has taken the largest share of the $270 million in funds allocated by Congress for repairs and upgrades. Additionally, a seawall and pumping system is now in the final stages of completion that will allow the facility to better weather future storms. Since Sandy, no patient care has taken place on the ground floor, and this will continue in the future as a precaution against future storm impacts.

Director Parauda stated that now that NY Harbor Healthcare has dramatically reduced the time that it takes to get patients in for appointments, their next goal is to bring down waiting room times. A patient brought up that he’s waited more than an hour to see a provider in the eye clinic because of appointment overbookings. Director Parauda stated that this is exactly the situation they plan to remedy in upcoming months. She also stated that, in alignment with Secretary Shulkin’s goals of providing high quality 21st Century Healthcare, they are also working to create a more professionalized environment in community areas in the Manhattan VA, to include an established process for nonprofits and community organizations to table and distribute information on their resources and initiatives. She also pointed out that VA facilities are relying on the increased professionalization of the Veterans Canteen Service to offer food, merchandise, and other items at affordable costs.

Director Parauda stated that patients who had relied on the Chapel Street facility that was closed in 2016 have since sought care at both the Manhattan and Brooklyn VA Medical Centers. Shuttle service from Chapel Street was discontinued because it wasn’t being used. She stated that patients who used Chapel Street as their primary care who are still having access problems should contact her office directly, and she noted that elected officials were also communicating with her office on behalf of their impacted constituents.

NOTE: If you know firsthand of any impacted veteran, please reach out to [email protected] and let us know.

She also discussed the current construction of a residential facility adjacent to the Brooklyn VA Medical Center campus, which will, once completed, replace the current residency at St. Albans Community Living Center in Queens.

Patients in attendance voiced a number of concerns, ranging from problems with Access-a-Ride, concerns about short staffing in clinics (Director Parauda stated that the VA is not currently impacted by any hiring freeze or government shutdowns), concerns about application of shingles vaccines, and concerns about quality and cost of the Canteen food. A significant healthcare concern brought up by a radiology patient is the overreliance on resident doctors to interact with patients, and that the attending doctors (who supervise the residents) are too often only behind their desks and not attending to patients themselves, which is impacting the quality of healthcare.

We provide these notes for informational purposes; if you have concerns about any of the issues raised in these notes, please feel free to reach out to [email protected].