On April 21, the NYC Veterans Alliance presented testimony before the NYC Council Committee on Veterans on proposed Resolution 579-A calling on Congress to pass and the President to sign the Toxic Exposure Research Act of 2015. We were the only organization other than the Vietnam Veterans of America to present testimony at this hearing, and the testimony itself was followed by an informative, in-depth discussion of the toxic exposures of Vietnam, Desert Storm, and OEF/OIF veterans. 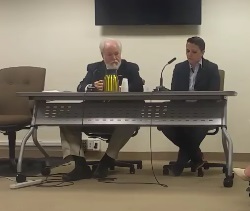 Below is the testimony presented by Founding Director Kristen Rouse:

My name is Kristen L. Rouse, and I am testifying on behalf of the NYC Veterans Alliance. I am a veteran of the United States Army, I served three tours of duty in Afghanistan, and I live in Brooklyn. On behalf of our membership, many of whom have been directly affected by toxic exposures in combat zones from Vietnam to Desert Storm to OEF, OIF, and beyond—I want to state the strong support of the NYC Veterans Alliance for this resolution.

The VA has been notoriously slow to recognize and study toxic exposures from Agent Orange, or even still to admit the causes of Gulf War Illness. Even just this past December, toxic exposure to troops in Iraq and Afghanistan from burn pits was removed from the list of topics that the VA funds for research. We fully support this resolution in support of federal legislation that would provide long overdue resources in the VA for tracking, studying, and treating the children of veterans exposed to Agent Orange and other toxic exposures. But it must be further noted that this is but one step toward the systemic change needed to recognize, study, and treat the long-term consequences of toxic exposures experienced by the men and women who have served in America’s conflicts abroad.

More than 40 years after the end of the Vietnam War, the VA still has not fully recognized all veterans exposed to Agent Orange for all of the presumptive illnesses caused by it. More than 25 years after the first Gulf War, the denial rate for Desert Storm veterans for Gulf War Illness is still 80%, and the VA and DoD continue to deny the realities of troops’ exposure to the catastrophic health consequences of nerve agents. Veterans such as myself who served in Afghanistan and Iraq were exposed at close proximity to massive burn pits and smoke inhalation of toxic substances, and the best we’re told thus far is to sign up online for the VA’s Burn Pit Registry so they can track us—while most VA providers I’ve personally spoken with seem to have no clue that burn pits even exist. Many of my peers who served in Iraq were exposed to the same nerve agents that still plague Desert Storm veterans, plus conditions related to depleted uranium, failures in water purification, and other problems that are only beginning to come to light, and the battle for recognition and treatment for these conditions remain an uphill battle.

Over the last 40 or more years, the VA has put more energy and resource into delaying, denying, and disqualifying than it has into documenting, studying, treating, and compensating illnesses and conditions directly caused by our military service. Systemic change is long overdue, and separate offices dedicated to rectifying this must be created and further empowered to take action to ease the suffering of veterans and their family members, and to recognize, understand, and treat these long-term illnesses.

For these reasons, we state our support for Resolution 579-A and the Toxic Exposure Research Act, and we further submit our support for H.R. 2237, the Helping Veterans Exposed to Burn Pits Act that was recently introduced in the U.S. House of Representatives, which proposes specific and coordinated research, training, and care related to toxic exposures that have and are still happening in both Iraq and Afghanistan. We suggest that this committee consider this for support as well.