Standing Up for Veterans: Our Community Reintegration Initiative

In early 2015, Mayor de Blasio touted his commitment to ending veteran homelessness as part of the Obama administration’s initiative (and large-scale funding) to end veteran homelessness by the end of 2015. NYC government lagged in its efforts to find appropriate affordable housing to allow a sufficiently large number of homeless veterans to move from the crowded, inadequate conditions of NYC’s homeless shelters. In late 2015, HRA made last-minute deals for veteran housing that have drawn anger and frustration from local communities and jeopardized the success of veteran reintegration into these communities.

NYC government could and should have done better. But despite the city’s flawed processes, we nevertheless want to see individual veterans get out of homeless shelters and into viable housing that is supported with social services to keep them on the right track and provide the educational and job coaching and opportunities that will allow them to reintegrate as valued members of their communities. We also want to urge local communities to embrace the veterans themselves as the good neighbors that they are.

The NYC Veterans Alliance is standing up for these veterans. We are there to show a friendly face to community members, and let them know that we are veterans (some of us formerly homeless as well) and that we make good neighbors. We’ve asked community members directly to embrace and support these individual veterans in their community, and we’ve worked to change negative stereotypes of formerly homeless veterans as being problematic or dangerous to communities.

Here's what’s been happening so far: 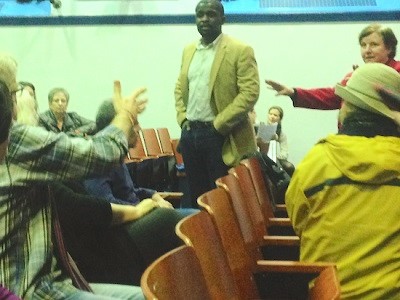 Community Board 7 (Manhattan, Upper West Side). In December, we spoke with community members at the CB7 Community Board meeting, we’ve visited the 95th Street facility, and we’re continuing to plan an event in this neighborhood. The veterans themselves, however, have been delayed in moving in, so we’re awaiting further information before making any announcements about the events. We received some local coverage:

Community Board 12 (Queens, Hollis Ave/Jamaica). Last Wednesday, we spoke with dozens of community members from CB12 before and after their protest at City Hall. Despite a lawsuit by these community groups from CB12 (and supported by the Public Advocate), some 30 veterans have already moved into the facility on Hollis Avenue. The Public Advocate and many community members (including a Navy veteran who is spokesman for one of the groups) has made it clear that their protest and lawsuit are not anti-veteran; they brought up important issues about the oversaturation of CB12 with city housing of the homeless, mentally ill, and other programs in comparison with other districts. We take no issue with the lawsuit, but we do hope to meet with more community members, visit the housing site, and show our support for the veterans themselves who are caught between this neighborhood’s anger and their own need to find adequate housing. We have also heard concerns that the veterans are not receiving services from HelpUSA, the provider contracted by the city to support veteran residents. 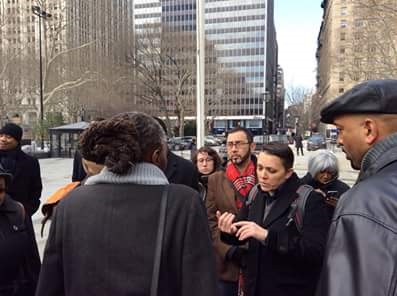 We will continue working on supporting veterans moving into these communities. Ultimately, we want to advance the notion that veteran reintegration—even following homelessness—is something that can be supported at the community level. We also want to ensure that veterans receive the services they’ve been promised. We will continue to update our members and the NYC veterans community on these developments. 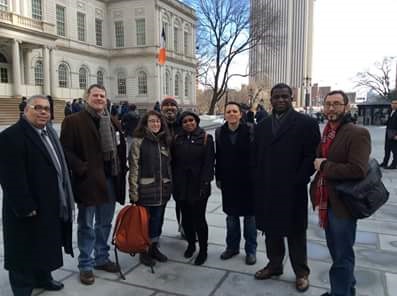