Concerns About the Post-Reform Veterans Advisory Board

Earlier this year, we were part of the push to reform the NYC Veterans Advisory Board in order to make it more truly representative of NYC veterans and also transparent, with published meeting announcements and minutes of meetings so that the NYC veterans community can understand what the VAB is doing on their behalf.

The nomination and appointment process remains opaque, but we have been encouraged that the VAB has been making progress in becoming the representative advisory board intended by the City Charter--until yesterday. Mid-afternoon on Monday, November 16, the Mayor's Office of Veterans Affairs announced that the next VAB meeting would be held in Queens--just a few hours following the announcement. This was absurdly short notice for anyone from our community to be able to attend.

This, added to the fact that there have yet to be any notes or minutes of any 2015 VAB meeting posted on MOVA's website, is concerning for the current state of the VAB. 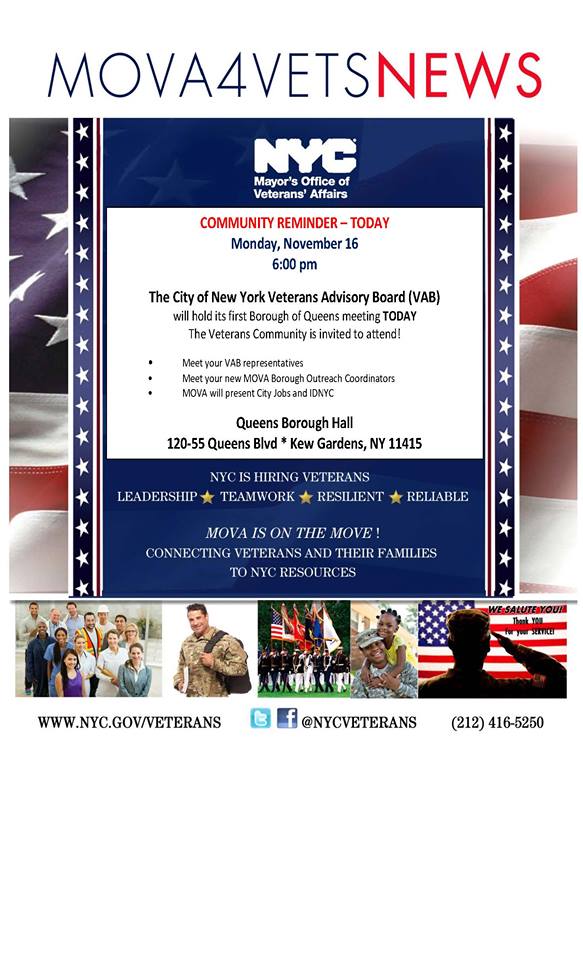 Did the VAB have prior knowledge of last night's meeting? Why was it never mentioned or announced at any of the Veterans Week events last week? Why was it not announced even by social media? There are endless means for announcing a meeting or event, yet this announcement came just before the meeting itself.

Although we respect the contributions and work of the new VAB members, we are nevertheless concerned that the VAB is returning to its pre-reform days of not communicating or connecting with members of our community--which is why reform legislation was passed. The VAB simply can and must do better by announcing meetings in advance and posting the minutes of these meetings in a timely manner.