On Thursday, November 12, the NYC Veterans Alliance presented testimony before the City Council's Committee on General Welfare and Committee on Veterans related to the oversight of the city's efforts to end veteran homelessness by the end of 2015. Founding Director Kristen Rouse presented the organization's testimony, and member LaTasha Peeler provided her own vital testimony about her experience as a formerly homeless veteran. 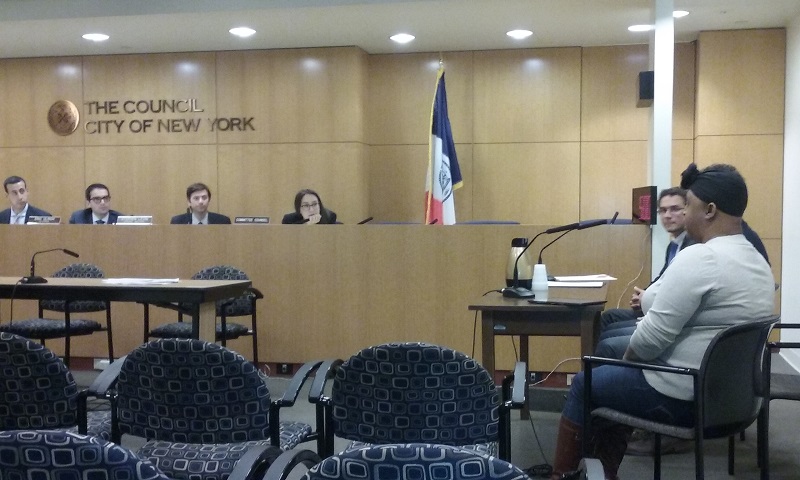 LaTasha Peeler telling City Council members about the difficulties she experienced as a homeless veteran. "Just because we're homeless doesn't mean we're not human," she said.

See coverage of this hearing in the Gotham Gazette here.

Below is the testimony delivered for the NYC Veterans Alliance:

My name is Kristen L. Rouse, and I am speaking on behalf of the NYC Veterans Alliance. I am a veteran of the United States Army, I served three tours of duty in Afghanistan, and I have lived in Brooklyn since leaving active duty in 2007.

The concerted effort between the federal government, city government, and the nonprofit sector in NYC to end veteran homelessness has been a tremendous success, and proof that when leaders commit the staffing, resources, planning and coordination to tackle complex problems, great progress can be made. We applaud the painstaking work of all those who have moved thousands of homeless veterans off the streets and out of shelters and into permanent housing. For so many, the programs in place have indeed worked as designed. Yet for the smaller—though still significant—number of struggling veterans who still remain on the margins, still more work needs to be done.

Yesterday at the Mayor’s Veterans Day Breakfast, it was heartening to hear the Mayor speak passionately about the successes of the city’s effort to end veteran homelessness. He said that for the remaining number of homeless veterans, “we know each one of them,” and that the city was continuing work to help them. This is indeed an accomplishment, and I applaud our city government for its tremendous work to help veterans remaining in the system. What I am here to point out is that there are still veterans outside of the system who are homeless or at risk for homelessness—and we still do not know them.

Just as there are far more individuals who are going hungry every night than ever apply for food stamps or other public assistance, we hear all the time about veterans who are not reaching out to the public system for assistance with their struggles to find or stay in a home. Veterans are resilient and resourceful individuals, and we hear often about cases where a veteran is couch surfing with friends, sleeping in a back room of a workplace or National Guard armory, or hidden away on a rooftop, in a car, or other hard-to-find places because they don’t want to reach out for help, or because resources to help them simply aren’t there. Programs to prevent veterans from becoming homeless are still too few, and veterans are too often told that programs are unavailable to them until they’re actually homeless for at least thirty or ninety days, or living in a public shelter for a certain amount of time.

The shortage of affordable housing is a citywide issue, and we applaud the city’s new effort to educate and provide incentives for landlords to accept veterans using housing vouchers. This is vital, especially in that the HUD-VASH voucher rates fall so much lower than the market rates of much of NYC’s housing stock. Yet this doesn’t address the struggles of the average veteran trying to make ends meet in NYC. Veterans coming home to NYC after recent deployments face the same scarcity of jobs and skyrocketing housing market as every other New Yorker. For example, after I came home from my most recent Afghanistan deployment, I had to hire a broker and pay premium rent for my current apartment because I couldn’t keep my last apartment while I was deployed. Now I’m paying more in rent than I would’ve if I hadn’t deployed for a third time. And I count myself among the lucky ones.

Younger veterans in particular are the ones most likely to be outside of the existing system. They are adept at surviving in the short term with few resources and are not detected by routine homelessness counts or outreach. They may be facing poverty for the first time, and find themselves  alienated by shelters that may expose them to drug use, recreate situations similar to those in which military sexual trauma occurs, or overwhelmingly aggravate symptoms of Post-Traumatic Stress. Despite being highly capable individuals, some of these veterans are extremely vulnerable, living on the edge of spiraling further into poverty and illness. Bringing these men and women into programs that adapt to their needs requires creative efforts and additional funding, and that cost pales in comparison to what will be needed if they become chronically homeless.

As we approach the end of 2015, we can celebrate the great successes of ending homelessness for a truly remarkable number of veterans. But when the city talks about Functional Zero, we must take into account the many veterans who still remain invisible to the system, and that younger veterans in particular who are contending with NYC’s stark economic realities may be at risk for homelessness on the near or long term. Veterans must be included in any city effort to provide affordable housing—not just for the recently homeless, but to prevent veteran homelessness in the future, and to ensure that veterans haven’t been left behind by the rest of NYC because of their military service. More must be put into place to prevent veteran homelessness, and to provide immediate help for those who are struggling right now to make ends meet. There must be more for veterans with families. There must be places to go for veterans who have service animals.

In short, resources to prevent and mitigate veteran homelessness must continue well beyond 2015. Recent successes are well worth celebrating, but NYC must further focus and refine the existing system to reach those still struggling in the margins, and to ensure that more veterans do not end up in the system.