VFW Post 3427 in Flushing hosted the event, and members of VFW, VVA, Catholic War Veterans, and other organizations across Queens and Brooklyn—veterans who had served during WWII, Korea, Vietnam, Bosnia, Iraq, and Afghanistan—made up the lively audience. VFW post commanders spoke to encourage members and other veterans to get involved in legislative policy, and Paul Schottenhamel from the American Legion spoke about the urgent need for organizations to work together. We couldn’t agree more on all accounts. 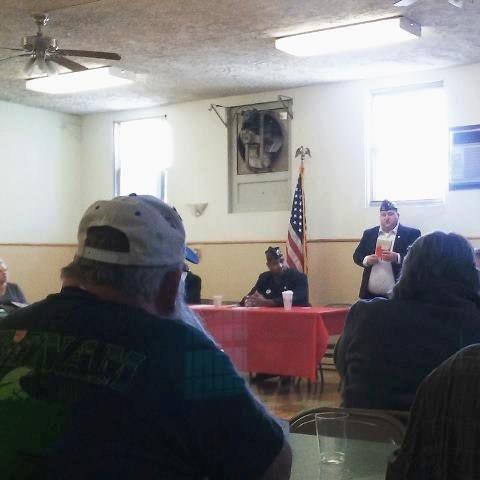 Other events were happening for elected officials in Queens yesterday, but a number came out for the breakfast and took questions from the audience. We were there to ask about a few items we included in our report last June. For example, Kristen asked NY State Assemblyman David Weprin about the status of the Pension Buyback bill currently sitting on Governor Cuomo’s desk. (We encourage everyone to call Gov. Cuomo’s office at 1-518-474-8390 to urge him to sign it!) Assemblyman Weprin hadn’t been tracking the status of the bill, but he encouraged us to be in contact with his staff about it. Assemblyman Michael DenDekker, Chairman of the Assembly’s Veteran’s Committee, mentioned two other bills currently awaiting the governor’s signature: one that remedies a loophole in the NY State property tax exemption for veterans on primary residences and another that eliminates use of the word “inmate” to describe veteran residents of VA facilities for absentee voting purposes—both of which are small wins, but wins nevertheless. Assemblywoman Nily Rozic discussed her special interest in the problems women veterans have been facing, especially the alarming rates of homelessness among women veterans. She mentioned her bill from last year that proposed to mandate a study of veteran homelessness in NY State by the NY State Division of Veterans Affairs, and that she planned to reintroduce it next year.

Congresswoman Grace Meng spoke about her work to hold the VA accountable for processing disability claims, mentioning that in New York, the average time to process a claim is notably higher than elsewhere in the country. She said that it was a high priority to find a bipartisan solution for reforming the VA and continuing to improve its responsiveness to veterans. An audience member mentioned that he believed he was experience health problems as a result to burn pit exposure in Iraq, which was a new issue for several of the legislators in the room. To discuss this further, Kristen mentioned that during 12 of her 31 total months spent in Afghanistan, she was heavily exposed to the toxic materials being burned in the largest burn pit in Afghanistan, and that she knew people who were beginning to get sick, and that she was noticing a change in her own respiratory health—and commented also that the VA should and must be more attentive and responsive to burn pit exposure than it has been to Agent Orange poisoning of Vietnam Veterans that took decades to recognize, and that so many Vietnam veterans continue to suffer from. Kristen also asked about what Congresswoman Meng was doing to ensure that federal resources to combat veteran homelessness continue to flow even after the administration’s planned “ending” of veteran homelessness nationwide by the end of this year. Congresswoman Meng said that she was interested in taking a more holistic approach to preventing veteran homelessness, including better transition for servicemembers out of the military, job placement and entrepreneurship resources, and other opportunities for transitioning veterans. 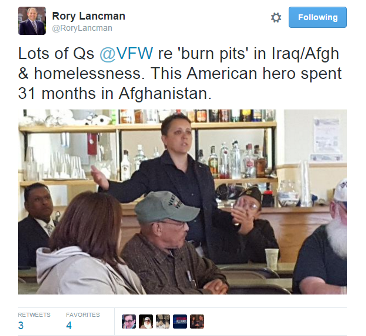 We asked City Council Member Rory Lancman, Chair of the Courts & Legal Services Committee, about why Veterans Treatment Courts still weren’t up and running in Staten Island and Manhattan. He encouraged us to attend a hearing in March 2016 in which the District Attorneys request funding from City Council, saying that this would be the ideal time to bring up these issues if still unresolved. We also asked why elected officials tell us that veteran employment is so important—yet the largest employer in NYC—NYC government—still doesn’t have a mandated hiring preference for all city jobs. He was unaware of this, and we will continue seeking to inform City Council members on this, as well as other recommendations we made last June.

There was a healthy audience in attendance, but these events should be filled to capacity with veterans. If elected officials don’t hear from us directly from us as veterans—and why we must be recognized as a voting constituency when it comes to veterans issues—then they will remain uninformed on what matters to us, and possibly even assume we’re okay with the status quo. Let’s do all we can to pack the house for next year’s event. And let’s also get more of these happening across the five boroughs to let our elected officials know that we expect them to know more and to do more to ensure veterans receive the services, benefits, and opportunities we’ve earned.