We Did It! Historic Bill Passed by NYC Council! 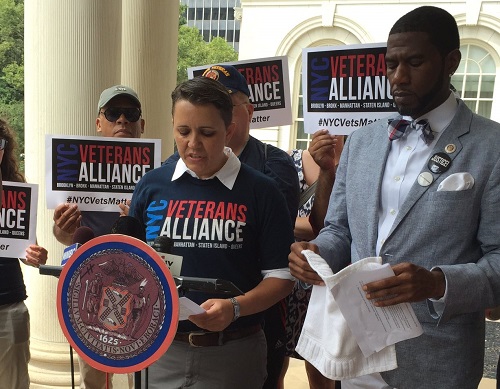 WE DID IT! Intro. 1259 is our FIRST BILL to originate with our membership--and it was passed today by NYC Council! 1259 was developed by our team, brought to introduction, pushed by our membership, opened to hearing, and finally voted to passage today thanks to the hard work of our members and team. We give our hearty thanks and congratulations to all of our members who gave input, took action, and supported our efforts with your dues and donations. This would not have been possible without you!

We'd especially like to thank all of the members who came to our early meetings and told us that first and foremost, veterans and military members need to be recognized and protected in NYC. Based on member input, we prioritized this bill to prohibit discrimination against veterans and military (summarized as "uniformed service"). We'd like to credit those who made this happen: Olivia Meier, who did key research and drafted the first version of this bill; Oswaldo Pereira and Samuel Innocent, who did early groundwork to push our proposed bill forward; Corey Ortega, who rallied support and moved the bill forward with a number of Council Members; and our members Manuel Rodriguez, Barry Tracy, Peter Shay, Ksenia Voropaeva, Molly Pearl, Elana Duffy, Rob Cain, Isra Pananon, Michael Abramovich, Jessica Apgar, Paul Friedman, Paul Dietrich, Jim Markson, Lee Covino, and many others who stood with us, told your stories, and made the case for why veterans and military members need to be protected in our city. We also thank our partners at Iraq and Afghanistan Veterans of America, Vietnam Veterans of America Chapter 72, and Richmond County American Legion who stood with us on the steps of City Hall.

We are grateful for the leadership of Public Advocate Tish James and Council Member Jumaane Williams who sponsored Intro. 1259 and urged their colleagues to support it. We appreciate the strong support of Commissioner Loree Sutton of the NYC Department of Veterans' Services and Commissioner Carmelyn Malalis of the NYC Commission on Human Rights. We thank Council Members Ulrich, Vallone, Borelli, Levine, Constantinides, Van Bramer, Torres, King, Johnson, Levin, Gentile, Rosenthal, Espinal, and Richards for signing on as co-sponsors. And we thank Speaker Mark-Viverito for bringing this bill to final vote for passage. 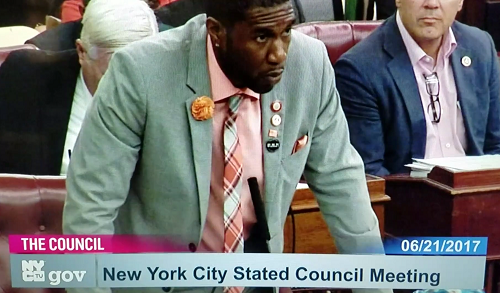 But more than anyone--we thank YOU, our members and donors who believed in us and backed our work not just with enthusiasm, but with your membership dues and donations.

Your contributions are what allowed us--veterans and family members and civilian allies--to get involved, take action, and make this historic, meaningful change that will improve the lives of veterans and military members for generations to come.

Veterans and military will now have local recourse when landlords and employers discriminate against them. NYC government will now be on the hook to ensure that New Yorkers know they can't ask discriminatory questions in job interviews and housing applications. NYC government will also have to ensure, top to bottom, that all agencies will provide fair and non-discriminatory treatment to the thousands upon thousands of veterans and reservists they employ. Read our op-ed in the New York Post about why this bill is so important.

This bill will change lives in NYC--and in cities across the United States of America that will be inspired to pass similar laws because of us.

Please help us build upon this success:

Join as a new member or increase your dues to invest monthly in getting results.

Make a tax-deductible donation of $100 or more so we can expand and grow our impact.

Invest in the work we're doing to empower veterans and families to make change in NYC and beyond. Thank you for your continued involvement and support!